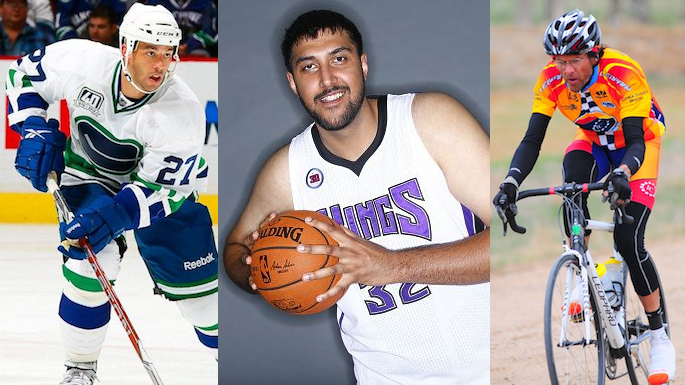 Indian-Americans are known for their academic achievements and not so much for their athletic prowess. Even though there are not many of us sweating in a gym or a court or a track field, there are Indian-origin athletes gaining a competitive edge on the playing field. They may not be wildly popular, but their stories are appealing as they bring together both the polarizing world of nerds and jocks. Also Read – South Asian Takeover: The Rise of Indian CEOs of American Companies

Alexi Grewal pedaled his way into the hearts of Americans when he became the first American man to win an Olympic gold medal in Mission Viejo in a road cycling event. Grewal, the son of a Sikh father from India and German mother, became the first (and still only) American to win the Olympic men’s road race. His victory heralded the coming of two decades American domination of international cycling.

His 1984 win earned him a place in the U.S. Bicycling Hall of Fame. However, his stardom was short-lived as he admitted to the use of performance-enhancing drugs. After failing to bounce back in 2011 in the elite level race, Grewal, 55, turned his attention from cycling to helping the homeless.

Hers is an improbable comeback story. Bharadwaj, who had a reputation for putting her 4-foot-10 body through some of the most difficult routines in college gymnastics and won two NCAA titles at UCLA, briefly quit gymnastics before she was selected in the Olympic team.

It took 12 years for her dream to finally become a reality when she was picked up for 2004 Olympic team where she served as team captain and aided the team in bringing home a silver medal. At age 25, when most gymnasts are coaching or reminiscing about their exploits, she became the nation’s second-oldest female gymnast competing in Olympics. Her training was subsidized by Pamela Anderson.

Bhardwaj retired from competitive gymnastics in 2005 and since then began her gymnastics coaching career. She was recently inducted into the USA Gymnastics Hall of Fame. Bharadwaj is one of the two Indian American gymnasts, and second Indian American athlete overall to win an Olympic medal.

At age four, Bhavsar’s parents enrolled him in a gymnastics class to keep him from climbing trees and furniture and jumping off of them. In no time, this Gujarati-American became a competitive artistic gymnast.

He was a member of the 2001 U.S. World Championships Team that earned an unprecedented silver medal, and he helped the United States defend that title at the 2003 World Championships. Despite his impressive routine, Bhavsar was the alternate on the 2004 U.S. Olympic Team.

Bhavsar again ended up as an alternate to the 2008 U.S. Olympic Team for men’s gymnastics and was selected to the team after Paul Hamm pulled back due to an injury. The U.S. men, however, went on to win the team bronze medal. Bhavsar finished second in the all-around at the 2008 Winter Cup Challenge. Bhavsar is currently working as an artist at Cirque du Soleil for their performance show Iris which debuted in July 2011.

In a 2011 poll of the NFL playing staff, it was discovered that Asians made up less than five percent and only one player of Indian descent in a league of nearly 2000 players. He was Brandon Chillar, a linebacker for Green Bay Packers and St Louis Rams. Chillar, whose father Ram Chillar is of Indian descent, played in the NFL from 2004 to 2011 and made over $14 million during his seven-year career.

Through NFL history, there have only been two NFL players, one Chillar and other Sanjay Beach who spent four seasons (1989-1993) as a wide receiver for the New York Jets, the Green Bay Packers, and the San Francisco 49ers. His most notable contribution was that he caught Packer’s star quarterback Brett Favre’s first career completion.

Despite a promising future, Beach retired from NFL four years after to complete his master’s degree in business administration. Today he is working as a financial advisor for Morgan Stanely Smith Barney in Ohio.

One look at the working roasters of U.S. football and you will see the national sport has no player of Indian origin at this point. Even off the field there is only one person and that is Sanjay Lal, a wide receiver’s coach for the Buffalo Bills. Before coaching Buffalo Bills, Lal coached New York Jets and Oklahoma Raiders.

At ten years and 176 days, Vinay Bhat was a true child prodigy. He became America’s youngest national master and went on to becoming an international chess master at the age of 15. He earned his third Grandmaster norm in July 2007 at the age of 23.

Bhat was ranked number 16 in the United States in the year 2010 and is the only player to have multiple wins in the US Chess League against the highest-ranked US player Hikaru Nakamura. After two and half years of professional chess play, Bhat began working full-time and is currently a Director of Analytics at Vinyl Interactive.

Malhotra – currently the only player of Indian origin in the NHL – is the son of a Punjabi father and a French-Canadian mother.

In 1998, at the age of 18, he was drafted 7th overall by the New York Rangers. He has since played for some of the top teams in the NHL such as Montreal Canadians, Dallas Stars, Columbus Blue Jacket and more. Malhotra is known as a two-way forward and for his faceoff proficiency. He is currently a free agent.

It is not always that we get to see 7-ft-5 Indian origin players. Meet Sim Bullar, a Canadian NBA player who wears size 22 shoes and has a wingspan of 8’2.”

The 22-year-old became the first player of Indian descent on an NBA team’s regular season roster after signing a 10-day contract with the Sacramento Kings owned by Vivek Ranadive.

After appearing in just one game for the Kings, Bhullar left the team to join the Canadian national team for the Pan Am Games.

At seven ft 2, 14- year-old Satnam Bhamar Singh dwarfed even the biggest NBA big men when they were his age. Five years later, Singh is a member of the Dallas Mavericks and the NBA’s first Indian-born player. From a scruffy local court in his tiny village of Ballo Ke in Punjab to Dallas Mavericks, his story is nothing short of a fairytale.

He also became the first player since the 2005 NBA draft to enter the draft without playing in college, overseas professionally, or in the NBA Development League.

Born in Guntur, India, Poruri is said to be the first Indian-American woman to play professional tennis on the Women’s Tennis Association (WTA) tour in the modern era. Poruri, who grew up in California, where, from a very young age, was known as the tennis prodigy. In 1986, she won the Orange Bowl. Two years later, at age 15 played her first US Open where she lost to Katerina Maleeya in the 2nd round.

She attended Stanford University on a full athletic scholarship, where she was a four-time All-American athlete, the 1994 Player of the Year and the top-ranked women’s collegiate tennis player in the country. Poruri continued to play professional tennis before taking up a job at Wall Street.

Uberoi and her sister Shikha, also a pro tennis player, were known as the “Indian tennis sisters.” She began playing tennis at the age of three. In doubles, Uberoi was a finalist at the 2005 Sunfeast Open and the 2005 Guangzhou International Women’s Open. And at the age of 16 years old she already achieved a professional WTA ranking.

At age 17 — and one year into her Princeton career —she decided to take a break from college and become a pro tennis player. Two years later, she stood at the service line facing Martina Navratilova, one of her childhood idols, in the U.S. Open.  She played some best tennis of her career. However in 2008, at the age of 22, Uberoi quit the world of tennis prematurely.

She is currently a digital marketing consultant at Nebu Inc., a fitness, and motivational coach. She recently shared her experience dealing with depression and crippling confusion that followed her retirement.

Ram turned pro in 2004 after he helped his college team go 32-0 and win the national championship. He is known best as a doubles specialist and has claimed eight ATP doubles titles in his career since turning pro. His career-high singles ranking is the world no. 78 achieved in November 2009. He reached as high as world no. 30 in doubles in July 2015.

This 31-year-old Indian-American is currently ranked at 88 in singles and 44 in doubles. He has also won two ATP singles titles at the Hall of Fame Tennis Championship in 2009 and again in 2015.