When it comes to Bollywood divas and their marriage, everyone usually presumes that the tinsel town beauties will marry an actor or someone else from the film fraternity itself. While many actresses do get hitched with the film stars or others from the glam world only, there are a few divas who choose businessmen as their life partners rather than actors.

So, we thought of listing down some famous Bollywood actresses who married businessmen. And, here they are:

The veteran actress, Mumtaz married millionaire, Mayur Madhvani in 1974 when she was holidaying in London. The couple dated for two years before getting hitched on May 29, 1974. After marriage, the actress said goodbye to the industry to stay with her husband in mansions of Mombasa and London. The actress never regretted her decision of marrying at the time when she was at the peak of her career. She even said in one of her interviews:

“I found a good man who loved me, so I chucked it all. I was fed up of films.”

The couple has two daughters, Natasha and Tanya. Their elder daughter, Natasha is married to the Bollywood actor, Fardeen Khan.

The love story of yesteryear actress, Tina Munim, and the Chairman of Reliance Group, Anil Ambani, is no less than a romantic Bollywood movie’s script. The business tycoon first spotted Tina at a wedding, and it was love at first sight for him. They met sometime later in Philadelphia where he asked her out, but she turned him down. However, fate had some other plans for them.

They met again in 1986, and it was at that time when Tina also fell in love with Anil. But, the Ambani family was not really keen on having filmy bahu, and hence, they did not approve of this match. Family pressure separated the couple for four long years. But eventually, love conquered all the obstacles and the two finally tied the knot in February 1991. The couple has two sons, Anmol and Anshul.

The sensuous diva, Shilpa Shetty, and the London-based businessman, Raj Kundra, first met during a business meeting for the promotion of Shilpa’s perfume brand, S2. But, soon after from being “just friends”, they became the lovebirds. Raj fell for Shilpa’s simplicity. Here’s what he said in an interview to the Filmfare magazine:

“It was love at first sight. From the moment I saw her, I knew I’d love her to be my life partner. She’s got an angelic side to her. Her homely side grew on me as I got to know her.”

However, soon their love life took an ugly twist when Raj’s ex-wife, Kavita, accused the actress of being a home-breaker. This left Shilpa very disturbed, but soon things sorted out when Raj cleared the air by saying that her marriage with Kavita ended 12 months ago and Shilpa was not the reason behind this. Finally, after all the drama, the two got married on November 22, 2009. They have a son, Viaan Raj Kundra.

Also Read: 12 Bollywood Actresses Who Embraced Motherhood Before They Turned 30

After an impressive acting debut in Bollywood movie, Swades, many thought that Gayatri Joshi is here to stay. But, she turned down all the Bollywood offers to marry the love of her life, Vikas Oberoi, the managing director of Oberoi Construction. The actress tied the knot with Vikas in a private ceremony on August 27, 2005. The couple is blessed with two sons.

Celina Jaitly surprised everyone with her hush-hush marriage to the Dubai-based hotelier, Peter Haag. The actress met the hotelier for the first time in Dubai through a common friend, and was attracted towards him instantly. Talking about what attracted her towards Peter, Celina told in one of her interviews:

“The fact that he is a thorough gentleman and has the most deeply mesmerising eyes in the world attracted me to him.”

Not just that, Celina had decided that she would marry Peter right after she saw him for the first time. She said:

“Actually we did not speak anything to each other but I just knew from the moment he walked in that he was my husband even though we had never met before.”

And, it really happened! Peter came to India in August 2010 and proposed marriage. Celina got engaged in a quiet ceremony on September 23, 2010, to the man of her dreams. They got married on July 23, 2011, at a spectacular 1,000-year-old monastery in Austria. The couple were soon blessed with two twin boys.

Don’t Miss: 7 Bollywood Divas Who Were Pregnant Before They Got Married

Amrita Arora started dating Shakeel Ladak, shortly after breaking up with her long-time boyfriend, Usmaan Afzaal. Shakeel was Amrita’s classmate in college, Nisha Rana’s husband. As per various reports, Nisha even accused the actress of “stealing” her husband. But soon, things got cleared when Amrita’s mother, Joyce Arora, pointed out that Shakeel was divorced way before meeting Amrita. Soon after, the actress married the businessman on March 2009. They have  two sons, Azaan and Rayaan.

After parting ways with her boyfriend, Yuvraj Singh, Bollywood actress, Kim Sharma, found love in Kenya-based businessman, Ali Punjani. The two dated for a couple of months before they got married in a private ceremony in August 2010. Talking about her married life, the actress once said:

“I am in a very happy place. Ever since I got married, I feel a sense of responsibility, I feel more grounded and secure now. I love spending time with my husband. Running a house isn’t an easy job and running a hotel is even tougher. My day starts with looking after the household needs after which I spend the day at the hotel and with my husband.”

Must Read: 13 Stunning Looks Of Bollywood Actresses At Their Sangeet Ceremony

Bollywood diva Asin Thottumkal married her long-time boyfriend, Rahul Sharma on January 19, 2016, in an intimate ceremony in Delhi. Rahul is the co-founder and CEO of Indian consumer electronics company, Micromax. The two were introduced to each other by the Bollywood couple, Akshay Kumar and Twinkle Khanna. The two had a Christian as well as a Punjabi wedding on the same day, so as to respect each other’s religions.

She is the dusky beauty of the tinsel town, Sameera Reddy. The actress walked down the aisle with a young entrepreneur named, Akshai Varde. The two of them got engaged in December 2013, and the wedding took place on January 21, 2014. Their wedding was meant to take place in April 2014, but she surprised everyone and got married early that year.

Suggested Read: 21 Bollywood Actresses Who Married In Their 30s And Proved That Age Is No Bar To Tie The Knot 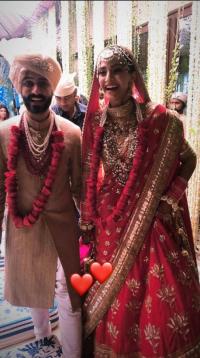 On May 08, 2018, Bollywood’s fashionista, Sonam Kapoor tied the nuptial knot with her long-time millionaire businessman beau, Anand Ahuja. Anand serves as the managing director of Shahi Exports and himself owns two brands, Bhane and VegNonVeg. Anand also possesses a property worth Rs 3000 crores. Reportedly, Sonam and Anand also bought an apartment in London’s Notting Hill recently where they would shift soon.

Theirs was a childhood friendship but once Bharat tried to hold Esha’s hand and she snapped it. They never talked since then continuously for 10 years! But love and Cupid know no bounds. Esha became an actress like her star parents, Hema Malini and Dharmendra, and Bharat went on to become a rich businessman like his father. Bharat is a diamond merchant and runs a company called R.G. Bangle Pvt. Ltd. Eventually, the couple tied the nuptial knot in 2012. The couple remarried on August 24, 2017, during Esha’s godh bharai. The cutesy couple became proud parents to a baby girl on October 20, 2017, whom they named, Radhya.

Don’t Miss: 8 Bollywood Actresses Who Made Us Believe That Age Is No Bar For Marriage 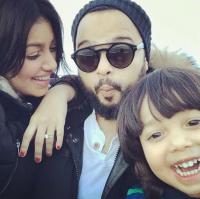 Everyone was surprised when Ayesha Takia simply left Bollywood, in spite of having a fairly good career. At the young age of 26, Takia settled for marriage by tying the knot with Farhan Azmi, a mega hotelier and the son of politician Abu Azmi. Needless to say, he is quite an influential name in B- town, in terms of money, power and prestige. Ayesha lives a content life now, with her husband and her son, Mikail Azmi.

Bollywood’s sensuous beauty Raveena Tandon is one actress who could make every head turn wherever she goes, even today. She married the film distributor Anil Thadani, in Udaipur’s Jag Mandir Palace. The beautiful Jag Mandir is located on an island in the picturesque Pichola Lake of Udaipur. In 1995, Raveena adopted two girls, Pooja and Chhaya. With Anil, she has two children- a boy named Ranbirvardhan and a girl named Rasha.

Isha met Timmy by chance. It was during one of their workout sessions when Isha and Timmy came across each other for the first time. Since then, a friendship ensued, and they officially started dating in the year 2008. They finally tied the nuptial knot on November 29, 2009. Timmy is a hotelier and runs a chain of hotels in Mumbai itself. The couple was blessed with a little angel in July 2014 whom they named Rianna.

Also Read: 9 Bollywood And TV Actresses Who Are Above 30, Single And Rocking It!

The South Indian and Bollywood actress, Reema Sen made her film debut with the Tamil movie, Chitram in the year 2000. She appeared in many Hindi films as well but because most of her films went flop, she didn’t gain limelight until the 2005 film, Malamaal Weekly. 7 years later, in 2012, Reema Sen got married to a restaurateur, Shiv Karan Singh.

After her engagement with Abhishek Bachchan did not culminate into marriage, Karisma Kapoor got married to Sunjay Kapur in the year 2003. However, the couple got divorced in 2016. Sunjay heads Sona Koyo Steering Systems Ltd and is a rich businessman. His company deals in car rental and leasing business.

Recommended Read: 12 Bollywood Actresses Who Were Already Married Before They Entered Bollywood

AWESOME NEWS! Now you can download BollywoodShaadis app and never miss a story. Get App

AWESOME NEWS! Now you can download BollywoodShaadis app and never miss a story. Choose your device Android or IOS (Apple)