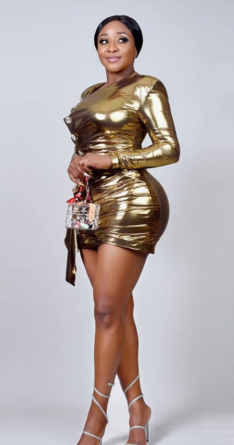 Iniobong Edo Ekim popularly known as Ini Edo is a renowned Nollywood actress, model, film maker and a philanthropist. She’s one of the prominent faces in the Nigerian film industry. She began her acting career in the early 2000s and has featured in over 100 films to date. The beautiful, sultry and talented actress is one of the best actor in Nollywood. Ini is the sixth most followed celebrity in Nigeria. She has been able to capture the hearts of her followers with her fashion statement and beautiful lifestyle.

Ini Edo was born on April 23, 1982 in Akwa-Ibom, Nigeria. She is the second of four children, three girls, one boy. Brought up in a strict environment, her mother was a teacher and her father a church elder. Ini attended Cornelius Connely College for her secondary education after which she got a Diploma in Theatre Arts from the University of Uyo. She obtained a bachelor’s degree in English from the University of Calabar. In 2014 she got a scholarship to study law at National Open University of Nigeria.

Her Rise to Fame

The sultry actress kick-started her acting career when she got discovered at an audition by a producer. Ini made her acting debut in Thick madam in the year 2003. She rose to stardom after starring in blockbuster Nigerian movie “World Apart“. She has appeared in over 100 films; she is one of the highest-profile actresses in Nigeria and Africa in general.

In 2013, she was one of the judges for the Miss Black Africa United Kingdom Beauty Pageant. Aside from acting, Ini is also a philanthropist. She do visit orphanage homes, pledge funds for the children’s upkeep and show support to the foundations. Due to her philanthropic gestures, the United Nations appointed her as the United Nations Habitat Youth Envoy.

Ini Edo has been a GLO brand ambassador for over ten years from 2006 to 2016. In 2010 she was named the brand ambassador of Noble Hair. She’s also an ambassador for Slim Tea Nigeria. Also, she signed a deal with Chivita, a popular Juice manufacturing company to be the face of the brand.
Ini Edo was appointed as the Special Assistant to the Akwa Ibom State Governor on Culture And Tourism by Udom Gabriel Emmanuel in 2016 and is currently holding the office till date.

Ini was once married but the marriage was short-spanned as it crashed unexpectedly.
In November 2008, Ini got married to US based Nigerian Businessman, Phillip Ehiagwina. The 6-year marriage got crashed in 2014 due to irreconcilable differences. There were claims that she cheated on her husband but she had come out to refute the claims. Since her divorce, she has been linked to many men. Recently, it was rumoured that she and Larry Gaaga were dating. The actress has since debunked the speculations.

Best Actress- TV Series at the Nigeria Entertainment Awards in 2016

With a net worth ranging between $2 to $2.4 million dollars, Ini Edo is regarded as one of the richest and highest paid actress in Nigeria.