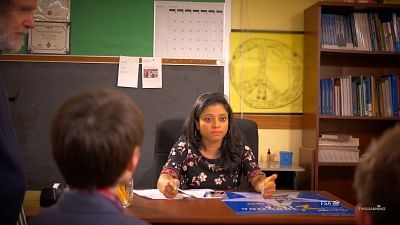 New Delhi, Sep 16 (IANS) The Radhika Konda-starrer “LIKE US”, a film about bullying awareness and prevention, is set to premiere at the Golden Door International Film Festival in Jersey City, New Jersey on September 21. The Indian-American actress says she wants to bring awareness that bullying is dangerous and that it affects the mental growth of children.

“Every individual should watch and understand what a kid has to face in school. Bullying hits kids’ mental growth. I am a perfect example for that, for many years I locked myself in a cage and was afraid to let myself out. I learned the hard way and it took me ages to collect my guts and chase my dreams. A child has a tender heart. This film explains that it’s okay to be different,” Radhika told IANS in an exclusive interview.

Talking about her personal life, she shared: “I was severely bullied in school and surprisingly in college. Kids used to tease me about my height. As a kid, it hurt my confidence deeply. I used to be ashamed of myself and never wanted to socialise because I was scared of getting mocked.

“When I read the script (of the short film), it brought back a lot of dark memories. No one has any right to mock a person based on their height, weight, personality, knowledge, financial status or mental ability. ‘LIKE US’ is about acceptance and deals with every emotion. My past made me join the cast and I want to bring awareness that bullying is dangerous and together we can do something about it.”

She doesn’t see her character, a school principal, as particularly strict or lenient. “I play a principal who is friendly but sometimes wallows in her own problems. The character really cares about the students and in the end, looks out for them in a surprising way.”

The producing team of “LIKE US” includes Neelima Adusumilli from Andhra Pradesh, Brindha Dhanabalan from Tamil Nadu, Jasminder Kaur from Andhra Pradesh and Sucharita Jain from New Delhi. Doesn’t Radhika wish to work in more Indian films or collaborate with Indian talents?

“I’ve always wanted to work in Indian films but movie-making is a very different business in India. Women are objectified on many levels. I want to make movies that bring change and raise awareness. I want to make movies about strong women, especially women who suffer from different forms of abuse. Women are such strong creatures on this earth. I want to show that in my work,” said the actress, who hails from Hanamkonda, Warangal in India.

Calling herself a “very strong woman”, she said: “I believe everyone should have the right to speak their mind. Where I came from, strength was seen as arrogance. Often I felt suffocated. I strongly believe in cultural values, ethics and rituals but they should not stop women from evolving. I wanted to live where my opinion mattered. I wanted a change and to find out what America could offer me.

“I am who I am today because I chose to follow my heart and be happy. I want to thank my husband Prabhakar Konda for bringing me to America so I could follow my dreams.”

She even donned the role of a writer, director and actor for the comedy web series “America Lo Ammakuchi”.

“Working in entertainment has always been my dream. I love comedy and writing the ‘America Lo Ammakuchi’ web series has been a great experience. There will definitely be a season 3,” she shared.

(The Quint is now available on Telegram. For handpicked stories every day, subscribe to us on Telegram)

(This story was auto-published from a syndicated feed. No part of the story has been edited by The Quint.)