What is the capital of brazil?

Brasília (/brəˈzɪliə/; Portuguese: [bɾaˈziljɐ]) is the federal capital of Brazil and seat of government of the Federal District. The city is located atop the Brazilian highlands in the country’s center-western region. It was founded by President Juscelino Kubitschek on April 21, 1960, to serve as the new national capital. Brasília is estimated to be Brazil’s third-most populous city. Among major Latin American cities, it has the highest GDP per capita.

Brasília was planned and developed by Lúcio Costa, Oscar Niemeyer and Joaquim Cardozo in 1956 in a scheme to move the capital from Rio de Janeiro to a more central location. The landscape architect was Roberto Burle Marx. The city’s design divides it into numbered blocks as well as sectors for specified activities, such as the Hotel Sector, the Banking Sector, and the Embassy Sector. Brasília was chosen as a UNESCO World Heritage Site due to its modernist architecture and uniquely artistic urban planning. It was named “City of Design” by UNESCO in October 2017 and has been part of the Creative Cities Network since then.

the capital of Brazil is Brasilia

All three branches of Brazil’s federal government are centered in the city: executive, legislative and judiciary. Brasília also hosts 124 foreign embassies. The city’s international airport connects it to all other major Brazilian cities and some international destinations, and it is the third-busiest airport in Brazil. It was one of the main host cities of the 2014 FIFA World Cup and hosted some of the football matches during the 2016 Summer Olympics; it also hosted the 2013 FIFA Confederations Cup. 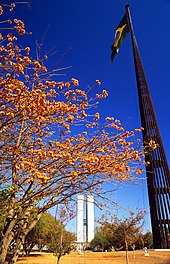 Brazil’s first capital was Salvador; later in 1763 Rio de Janeiro became Brazil’s capital until 1960. During this period, resources tended to be centered in Brazil’s southeast region, and most of the country’s population was concentrated near its Atlantic coast. Brasília’s geographically central location fostered a more regionally neutral federal capital. An article of the country’s first republican constitution, dated 1891, states that the capital should be moved from Rio de Janeiro to a place close to the country’s center.

The plan was conceived in 1827 by José Bonifácio, an advisor to Emperor Pedro I. He presented a plan to the General Assembly of Brazil for a new city called Brasília, with the idea of moving the capital westward from the heavily populated southeastern corridor. The bill was not enacted because Pedro I dissolved the Assembly.

According to legend, Italian saint Don Bosco in 1883 had a dream in which he described a futuristic city that roughly fitted Brasília’s location. In Brasília today, many references to Bosco, who founded the Salesian order, are found throughout the city and one church parish in the city bears his name.

Juscelino Kubitschek was elected President of Brazil in 1955. Upon taking office in January 1956, in fulfilment of his campaign pledge, he initiated the planning and construction of the new capital. The following year an international jury selected Lúcio Costa’s plan to guide the construction of Brazil’s new capital, Brasília. Costa was a student of the famous modernist architect Le Corbusier, and some of modernism’s architecture features can be found in his plan. Costa’s plan was not as detailed as some of the plans presented by other architects and city planners. It did not include land use schedules, models, population charts or mechanical drawings; however, it was chosen by five out of six jurors because it had the features required to align the growth of a capital city. Even though the initial plan was transformed over time, it oriented much of the construction and most of its features survived.

Brasília’s accession as the new capital and its designation for the development of an extensive interior region inspired the symbolism of the plan. Costa used a cross-axial design indicating the possession and conquest of this new place with a cross, often likened to a dragonfly, an airplane or a bird. Costa’s plan included two principal components, the Monumental Axis (east to west) and the Residential Axis (north to south).

The Monumental Axis was assigned political and administrative activities, and is considered the body of the city with the style and simplicity of its buildings, oversized scales, and broad vistas and heights, producing the idea of Monumentality. This axis includes the various ministries, national congress, presidential palace, supreme court building and the television and radio tower.

The Residential Axis was intended to contain areas with intimate character and is considered the most important achievement of the plan; it was designed for housing and associated functions such as local commerce, schooling, recreations and churches, constituted of 96 superblocks limited to six stories buildings and 12 additional superblocks limited to three stories buildings; Costa’s intention with superblocks was to have small self-contained and self-sufficient neighborhoods and uniform buildings with apartments of two or three different categories, where he envisioned the integration of upper and middle classes sharing the same residential area. But at that time he did not foresee the growing population in the city. The capacity limit in his plan later caused the formation of many favelas, poorer, more densely populated satellite cities around Brasília, peopled by migrants from other place in the country.

The urban design of the communal apartment blocks was based on Le Corbusier’s Ville Radieuse of 1935, and the superblocks on the North American Radburn layout from 1929./Visually, the blocks were intended to appear absorbed by the landscape because they were isolated by a belt of tall trees and lower vegetation. Costa attempted to introduce a Brazil that was more equitable, he also designed housing for the working classes that was separated from the upper- and middle-class housing and was visually different, with the intention of avoiding slums (favelas) in the urban periphery. The superquadra has been accused of being a space where individuals are oppressed and alienated to a form of spatial segregation.

One of the main objectives of the plan was to allow the free flow of automobile traffic, the plan included lanes of traffic in a north–south direction (seven for each direction) for the Monumental Axis and three arterials (the W3, the Eixo and the L2) for the residential Axis; the cul-de-sac access roads of the superblocks were planned to be the end of the main flow of traffic. And the reason behind the heavy emphasis on automobile traffic is the architect’s desire to establish the concept of modernity in every level.

Though automobiles were invented prior to the 20th century, mass production of vehicles in the early 20th made them widely available; thus, they became a symbol of modernity. The two small axes around the Monumental axis provide loops and exits for cars to enter small roads. Some argue that his emphasis of the plan on automobiles caused the lengthening of distances between centers and it attended only the necessities of a small segment of the population who owned cars. But one can not ignore the bus transportation system in the city. The buses routes inside the city operate heavily on W3 and L2. Almost anywhere, including satellite cities, can be reached just by taking the bus and most of the Plano Piloto can be reached without transferring to other buses.

Later when overpopulation turned Brasília into a dystopia, the transportation system also played an important role in mediating the relationship between the Pilot plan and the satellite cities. Because of overpopulation, the monument axis now has to have traffic lights on it, which violates the concept of modernity and advancement the architect first employed. Additionally, the metro system in Brasília was mainly built for inhabitants of satellite cities. Though the overpopulation has made Brasília no longer a pure utopia with incomparable modernity, the later development of traffic lights, buses routes to satellite cities, and the metro system all served as a remedy to the dystopia, enabling the citizens to enjoy the kind of modernity that was not carefully planned.

At the intersection of the Monumental and Residential Axis Costa planned the city center with the transportation center (Rodoviaria), the banking sector and the hotel sector, near to the city center, he proposed an amusement center with theatres, cinemas and restaurants. Costa’s Plan is seen as a plan with a sectoral tendency, segregating all the banks, the office buildings, and the amusement center.

One of the main features of Costa’s plan was that he presented a new city with its future shape and patterns evident from the beginning. This meant that the original plan included paving streets that were not immediately put into use; the advantage of this was that the original plan is hard to undo because he provided for an entire street network, but on the other hand, is difficult to adapt and mold to other circumstances in the future. In addition, there has been controversy with the monumental aspect of Lúcio Costa’s Plan, because it appeared to some as 19th century city planning, not modern 20th century in urbanism.

An interesting analysis can be made of Brasília within the context of Cold War politics and the association of Lúcio Costa’s plan to the symbolism of aviation. From an architectural perspective, the airplane-shaped plan was certainly an homage to Le Corbusier and his enchantment with the aircraft as an architectural masterpiece. However, it is important to also note that Brasília was constructed soon after the end of World War II. Despite Brazil’s minor participation in the conflict, the airplane shape of the city was key in envisioning the country as part of the newly globalized world, together with the victorious Allies. Furthermore, Brasília is a unique example of modernism both as a guideline for architectural design but also as a principle for organizing society. Modernism in Brasília is explored in James Holston’s book, The Modernist City.

Juscelino Kubitschek, president of Brazil from 1956 to 1961, ordered Brasília’s construction, fulfilling the promise of the Constitution and his own political campaign promise. Building Brasília was part of Juscelino’s “fifty years of prosperity in five” plan. Already in 1892, the astronomer Louis Cruls, in the service of the Brazilian government, had investigated the site for the future capital. Lúcio Costa won a contest and was the main urban planner in 1957, with 5550 people competing. Oscar Niemeyer was the chief architect of most public buildings, Joaquim Cardozo was the structural engineer, and Roberto Burle Marx was the landscape designer. Brasília was built in 41 months, from 1956 to April 21, 1960, when it was officially inaugurated.