Looking for help identifying your favourite magic mushrooms? In this article, we take a look at the most common types of shrooms that you can encounter.

There are hundreds of magic mushroom varieties spread across the world. Hence, whenever you plan to experiment with these mushrooms, it’s vital you know exactly what species you’re dealing with. In this article, we look at some of the most popular types of magic mushrooms. Remember to study these varieties closely and never consume a mushroom without being sure it is 100% safe to do so.

Mushroom poisoning occurs from toxins found in certain mushrooms. It most commonly occurs after ingesting wild mushrooms that have been misidentified as safe. The symptoms of mushroom poisoning can vary, as can the severity. While some toxins can cause moderate symptoms like gastrointestinal discomfort, others can be lethal.

To avoid mushroom poisoning, it is vital to familiarise yourself with different types of wild mushrooms to differentiate between which are safe and which aren’t. To help you do so, we have provided descriptions for some of the most common types of magic mushrooms. This will help ensure you enjoy a safe, reliable trip every time.

Psilocybin mushrooms are the most popular kind of magic mushroom. As the name suggests, they contain psilocybin, a natural psychoactive compound which is mainly responsible for the mind-altering effects associated with shrooms. Psilocybin has been found in over 200 species of mushrooms, however, the most potent psilocybin mushrooms are those belonging to the genus Psilocybe. Psilocybe mushrooms grow around the world, and archaeological evidence suggests they have been used by native peoples of Mesoamerica for religious communion, divination, and healing.

Need help identifying magic mushrooms? We provide an overview of the most common species.

Psilocybe semilanceata, also known as “liberty caps,” are believed to be one of the most potent kinds of psilocybin mushroom. They are characterised by their large, leathery-brown caps and pale, curved stems.

The caps of these mushrooms have a diameter between 5-22mm and a length of roughly 6-22mm. They can be either conical or bell-shaped; the cap can vary in colour depending on the hydration of the mushroom. Well-hydrated caps will display darker shades of brown (sometimes with a blue or greenish tinge) and may have grooves running down them, corresponding to the gills on the underside. On the underside of the cap, Psilocybe semilanceata will have between 15-27 narrow gills. When injured, these mushrooms quickly turn blue.

Psilocybe semilanceata can be found across both North America and Europe. It tends to grow in meadows and pastures, especially. However, they do not grow directly out of dung like some other species.

Cubensis is the most popular kind of magic mushroom and is usually referred to as the “golden teacher” mushroom. It can generally be found across the southeastern United States, Central America, northern parts of South America, and throughout Southeast Asia.

Golden Teachers have large caps ranging from 20-80mm in diameter. The caps may be conic in young mushrooms and tend to flatten out with maturity. They have a distinct reddish, almost cinnamon colour. Underneath the caps, the mushrooms have closely spaced gills that start out gray and darken with age. Mature golden teachers may have almost black gills. 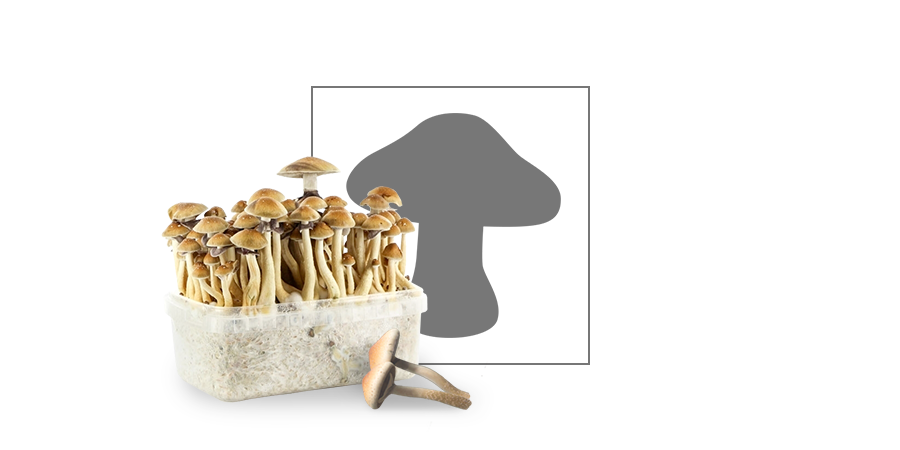 These mushrooms usually flower right before the hottest parts of the year. They were first described in Cuba, but are now widely available across the world thanks to being really easy to cultivate.

Psilocybe mexicana refers to a species of mushroom that grows natively in Central and South America. These mushrooms have been used for thousands of years by indigenous people.

Psilocybe mexicana is very similar in appearance to semilanceata. They have large caps (usually ranging from 10-20mm) with a conical or bell shape. They may have a slight papilla (or umbo) and are usually light brown or beige in colour. Like semilanceata, these mushrooms may feature blue or greenish tones, and easily turn blue when injured.

Psilocybe mexicana can grow solitary or in groups. It likes to pop up among moss on roadsides and trails, humid meadows, or the grassy areas of forests. These mushrooms are usually found at elevations between 300–550 metres between May and October.

Psilocybe cyanescens, also known as “wavy caps,” are usually found in North America, Western Europe, Central Europe, New Zealand, and parts of the Middle East (like Iran). Unlike semilanceata and mexicana, these mushrooms have large, wavy caps that can measure between 15-50mm in diameter. The more mature the mushroom, the wavier the caps tend to be.

When moist, these mushrooms tend to have a caramel or chestnut-brown colour. As they dry out, they become paler, fading to pale buff or slightly yellowish when dried completely. Many parts of these mushrooms, including the cap, gills, and stems, tend to stain blue when touched or injured. The gills underneath the caps can be light brown to dark purple in colour (depending on maturity) and tend to have lighter-coloured edges.

Cyanescens mushrooms like to grow among wood chips, especially in and along the perimeter of mulched plant beds in urban areas. In fact, the rapid use of mulch as a form of controlling weeds has caused this species to spread into many areas of the globe where it previously did not exist. 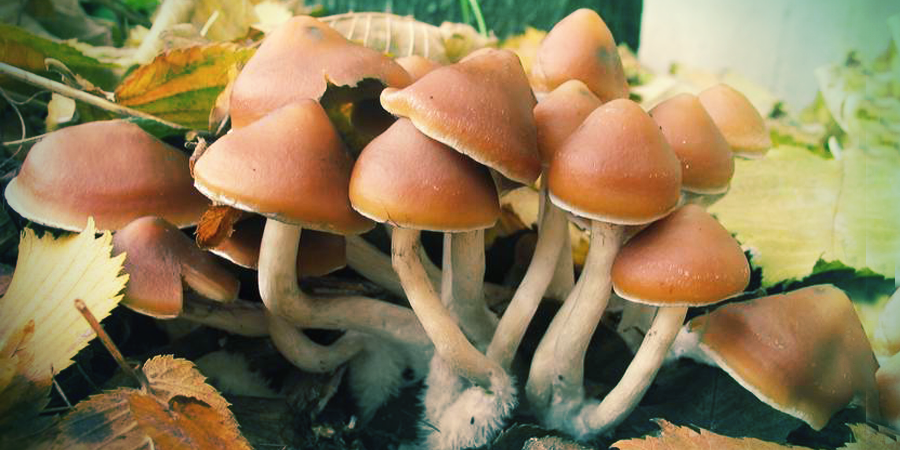 Also known as the “flying saucer mushroom,” Psilocybe Azurescens is an extremely potent species of magic mushroom. It is believed to grow naturally, only along a small area of the West Coast of the United States. Although, it has since been cultivated in many countries around the globe.

As the name suggests, azurescens tend to have large, saucer-like caps ranging from 30-100mm in diameter. Younger mushrooms may have slightly more conic caps that eventually flatten with maturity. When moist, these mushrooms are generally chestnut or caramel brown in colour and when mature, may display dark blue (almost black-ish) hues. The edges of the caps may have slight grooves that correspond with the gills underneath. Bruised areas of the mushroom tend to turn dark blue very quickly. Mature azurescens will have dark gills and chalk-white stems.

These mushrooms usually grow in groups in wood chips and/or sandy soils. They especially like coastal areas and tend to pop up around dune grasses between September and January. 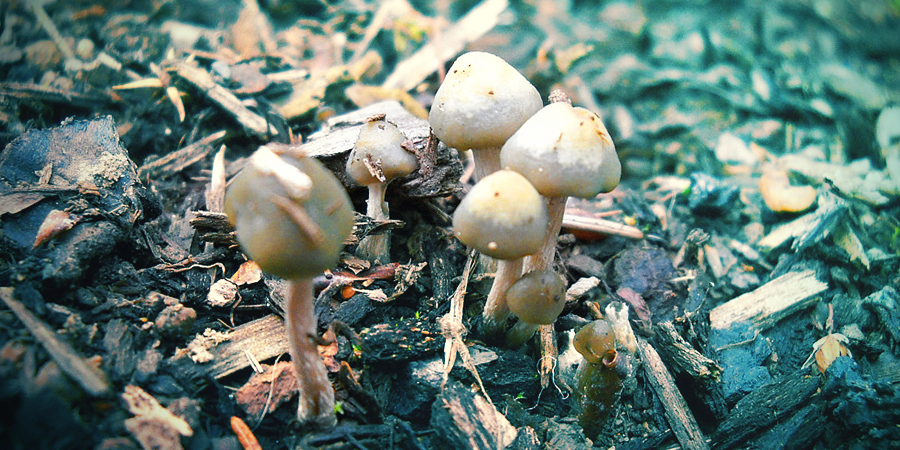 Psilocybe baeocystis are known by a variety of names, including “bottle caps,” “knobby tops,” “blue bells,” and “olive caps.” They are usually found in the US across the Pacific Northwest. These mushrooms often have medium-sized caps measuring between 15-55mm. The caps have a conical shape and are usually thin and distinctly rippled due to the gills underneath.

They have a unique colour, showcasing a dark, olive brown tone, sometimes with steel blue tinges. The stems are long, can be straight or curved, and are usually chalk-white in appearance.

Baeocystis mushrooms bruise very easily, at which point they usually stain blue. They love growing in conifer mulch, wood chips, and/or lawns rich in lignin. They sometimes also grow from the fallen cones of Douglas fir. They tend to be found growing under other plants like rhododendrons and rose bushes in mulched garden beds.

As we mentioned earlier, mushroom poisoning can be extremely dangerous. It is so important you always exercise extreme caution when handling and/or picking mushrooms.

Do not pick or consume a mushroom unless you are sure it is safe to do so. Also, do not make hand-to-mouth contact after handling mushrooms, as this may introduce harmful toxins into your system. For extra safety, we recommend you check out our mushroom grow kits, which allow you to grow some of the most popular mushroom varieties (including those listed above) right in the comfort of your home.