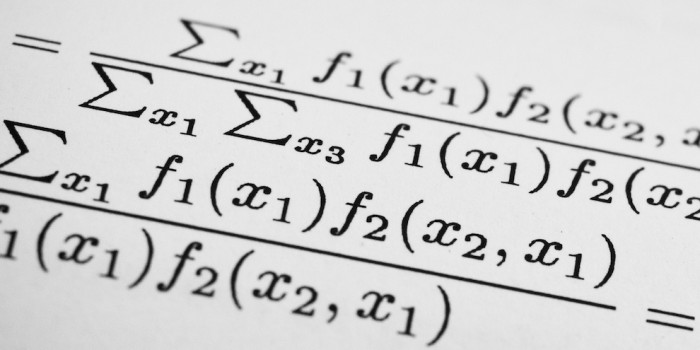 You might think the principal coder behind PolitiFact took naturally to math. You’d be wrong.

Somewhere in middle school, I had convinced myself that I was bad at math. It was okay: My mom was bad at math too. So were lots of people I looked up to. “Bad at math” was a thing — probably even genetic — and it was okay.

I so thoroughly convinced myself that I was bad at math that I very nearly didn’t graduate from high school. It took tutors and hours a week to squeak through an advanced algebra class my friends had all breezed through on their way to much harder classes.

But it was okay. I was bad at math. They weren’t. Simple as that.

And it was all a lie.

“Bad at math” is a lie you tell yourself to make failure at math hurt less. That’s all it is. Professors Miles Kimball and Noah Smith wrote in The Atlantic that many of us faced a moment in our lives where we entered a math class that some of us were prepared for and some of us weren’t. Those that got it right away were “good at math” and those who didn’t, well, weren’t. Or so we believed. Those who were good kept working to stay good, and those of us who were bad at it believed the lie.

Now, Kimball and Smith write that bad at math is “the most self-destructive idea in America today.”

Well, Professors Kimball and Smith, welcome to journalism, where “bad at math” isn’t just a destructive idea — it’s a badge of honor. It’s your admission to the club. It’s woven into the very fabric of identity as a journalist.

And it’s a destructive lie. One I would say most journalists believe. It’s a lie that may well be a lurking variable in the death of journalism’s institutions.

Name me a hot growth area in journalism and I’ll show you an area in desperate need of people who can do a bit of math. Data. Programming. Visualization. It’s telling that most of the effort now is around recruiting people from outside journalism to do these things.

But it doesn’t end there. Name me a place where journalism needs help, and I’ll show you more places where math is a daily need: analytics, product development, market analysis. All “business side” jobs, right? Not anymore.

Truth is, “bad at math” was never a good thing in journalism, even when things like data and analytics weren’t a part of the job. Covering a city budget? It’s shameful how many newsroom creatures can’t calculate percent change. Covering sports? It’s embarrassing how many sports writers dismiss the gigantic leaps forward in data analysis in all sports as “nerd stuff.”

In short, we’ve created a culture where ignorance of a subject is not only accepted, it’s glorified. Ha ha! Journalists are bad at math! Fire is hot and water is wet too!

Through grit and luck and a Hail Mary pass of a grade on a final exam, I did graduate from high school. And in 1993 I went to the University of Nebraska-Lincoln, where the College of Journalism and Mass Communications at the time said the curricular equivalent of “Math? Why the hell do you need math?” I thought this was great. No math? I must be in heaven.

Twenty years later, I’m now a professor in that same journalism school that let me skip out of math. We don’t do that anymore, but our math requirements are pretty thin and universally reviled by students, most of whom would say they’re bad at math. As a professor, I can take classes for free. And it’s abundantly obvious to me that journalism’s problems aren’t with journalism — they’re about money. Where does one go to learn about money? Business school.

So I thought I would get an MBA to better understand the business side of journalism. I walked over to the business college and told them I wanted to do this. “Have you had calculus as an undergrad?” Oh. Uh, no. “Have to have it. It’s an admission requirement.”

So almost two decades to the day that I set foot on campus, there I was, taking a math placement exam. This exam is given to all incoming freshmen to determine which math class they should start with. I took it and could barely read the questions. If they had given me a grade, I would have bombed it. I tested straight into a remedial math class for students who didn’t get enough in high school. Congrats, Math Department: Your test nailed it.

I probably could have crammed and watched Khan Academy videos for hours, taken it again, and landed in a higher math class. But I would have felt like I cheated my way in. And that would have been terrifying. So, I took the class. Math 100A. Just a 37-year-old professor and 30 or so 18-year-old freshmen. Totally normal; I didn’t stick out at all. The instructor was in first grade when I was last in a math class. She asked me what I was doing there. Told her my story. Her reaction: She was bad at math too, until she got to college. Now, she’s getting a Ph.D. in it.

Given all that, I lived in absolute terror that I wouldn’t do well. I sat in the front row. I asked questions non-stop. I did all the homework. I did extra practice problems. I raised my hand to answer questions so much the instructor asked me to stop. I studied for hours.

And I got an A+. I was shocked. And elated. In spite of the fact that I’m a grownup and should get an A in a remedial course, I was pumped up. I can’t remember my last A in math.

On to the next class.Math 101: College Algebra. Just the name gave me chills. I could barely pass high school algebra; how the hell was I going to handle college algebra? Here I was, a grown man with a family and a house and a job and a resume, sweating bullets and losing sleep about a class freshmen take.

I’m halfway through calculus this semester. I have never in my life worked this hard in a class. I’ve never sat awake at night worrying about a class like I have tossing and turning thinking about how to calculate the derivative of something. I can go speak in front of 1,000 people with less than five minutes of preparation and be downright calm compared to the feeling I have going to take a test.

Right now, I’ve got a B+. And if I walk out of there with it, it’ll easily be the most proud of a grade I’ll ever have been.

Why? Because at this level, I’m seeing the consequences of how a student approaches math. On each test, the median score has been around a high F or a low D. The last test saw more than half the class fail. It’s brutal. Of the 111 students in the class, I’m guessing 70 of them will be taking it again.

The only advantage I have over my classmates? I know exactly how to fail at math: Don’t put any effort in. Blow it off. Do something else. A glass of wine and a rerun of Big Bang Theory kicks the crap out of applications of extrema using derivatives, even if you hate wine and loathe Big Bang Theory.

So do me a favor: Try. Stop with the jokes. Stop telling me, “Oh, I could never do that” when you ask me about math. Because it’s not true. You can. If you try.

You can be good at math.

Matt Waite is a professor of practice at the College of Journalism and Mass Communications. Previously, he was senior news technologist at the St. Petersburg Times, where he was the principal developer of the Pulitzer Prize-winning PolitiFact.

Photo by Tony Kamenick used under a Creative Commons license.