Unmanned ground vehicles are generally considered Remote-Operated and Autonomous, although Supervisory Control is also used to refer to situations where there is a combination of decision making from internal UGV systems and the remote human operator.

Pakistan Army has reportedly deployed “many” unmanned ground vehicles (UGVs) near the border close to India.

The UGVs are similar to Russian-made Platform-Ms, according to some media reports.

The Platform-M remotely controlled robot armed with grenade launchers and Kalashnikov rifles. The RPG-26 rocket launcher and 7.62 mm general purpose machine gun can be integrated on the vehicle, which can reach a speed of 25 km per hour and can be directed up to 16 km range with LOS (line of sight) technology.

The UGV can be used for gathering intelligence, discovering and destroying fixed and mobile targets, firepower support, patrol and field protection missions.

It is equipped with optical-electronic and radio reconnaissance locators, which enable the Russian robot to perform combat tasks during the night without unmasking itself. Platform-M is a universal platform that can be supplies with a variety of defensive chassis and weaponry.

An unmanned ground vehicle (UGV) is a vehicle that operates while in contact with the ground and without an onboard human presence. UGVs can be used for many applications where it may be inconvenient, dangerous, or impossible to have a human operator present. Generally, the vehicle will have a set of sensors to observe the environment, and will either autonomously make decisions about its behavior or pass the information to a human operator at a different location who will control the vehicle through teleoperation. 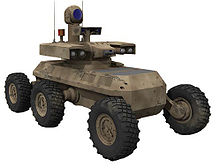 The UGV is the land-based counterpart to unmanned aerial vehicles and unmanned underwater vehicles. Unmanned robotics are being actively developed for both civilian and military use to perform a variety of dull, dirty, and dangerous activities.

The platform can be based on an all-terrain vehicle design and includes the locomotive apparatus, sensors, and power source. Tracks, wheels, and legs are the common forms of locomotion. In addition, the platform may include an articulated body and some are made to join with other units.

A primary purpose of UGV sensors is navigation, another is environment detection. Sensors can include compasses, odometers, inclinometers, gyroscopes, cameras for triangulation, laser and ultrasound range finders, and infrared technology.

A remote-operated UGV is a vehicle that is controlled by a human operator via interface. All actions are determined by the operator based upon either direct visual observation or remote use of sensors such as digital video cameras. A basic example of the principles of remote operation would be a remote controlled toy car.