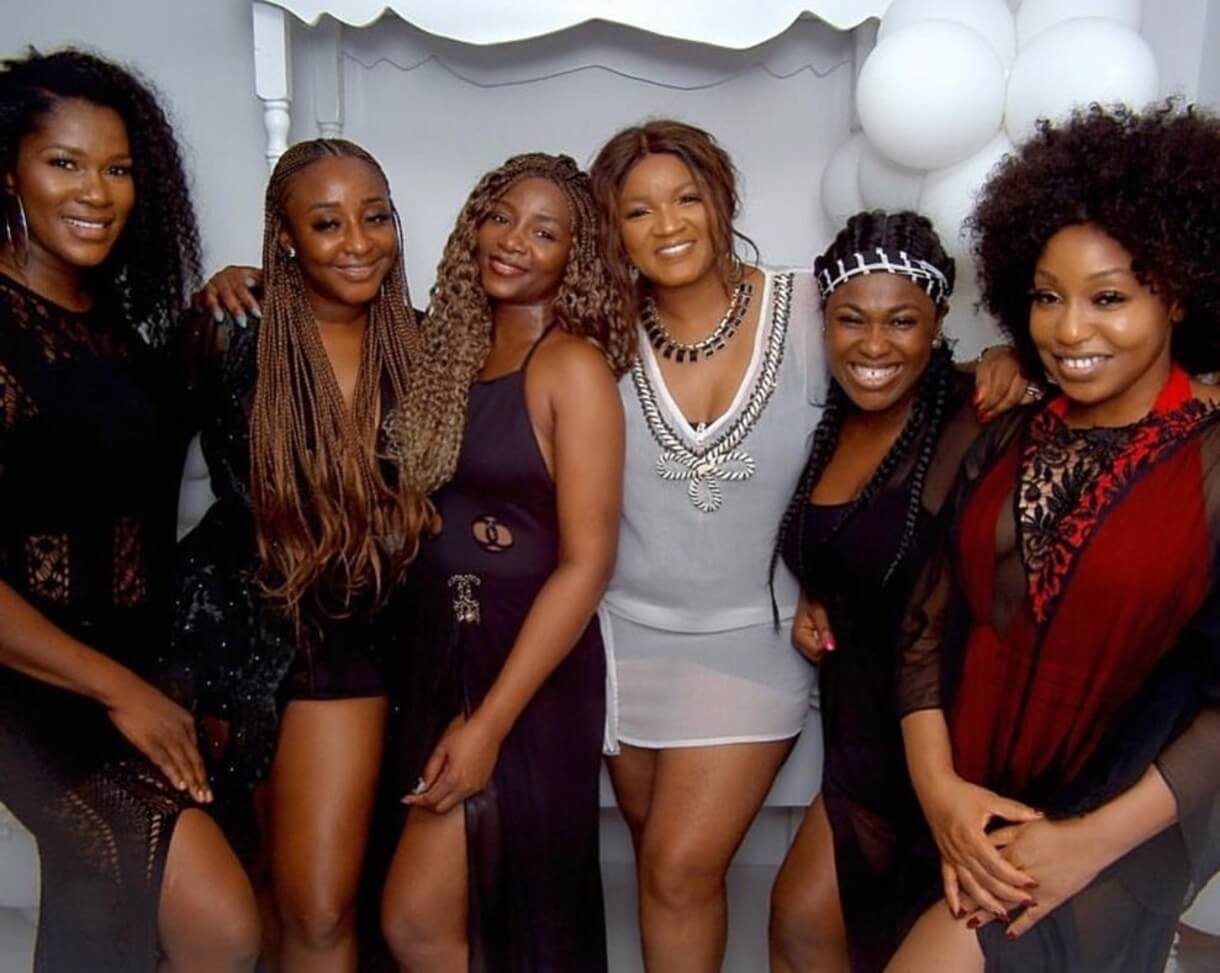 An actress is a female actor who performs in a Theatre, Movie, and Television to portray the character in a script and make the character real to the audience. An actor can be a man or woman; besides, you can also call a female professional actor, an actress. They get rewarded for acting in movies and some invest their earnings. This article looks at the richest actresses in Nigeria.

The Nigeria movie industry is a multimillion-dollar show business, and movie producers pay actors mouthwatering fees to perform. Nigeria is blessed with abundant talented, gorgeous women actresses who not only act exceptionally in movies to thrill their viewers, but also earn a lot from the acting profession.

If you watch movies or follow the movie industry, you will relate to this article as we bring you the top ten richest actresses in Nigeria. The internet has lots of information about these affluent actresses. They are inspirations to every person, so without any delay, let us start this list from one rich actor to the richest actress.

Here are the richest actresses in Nigeria:

Stunning Genevieve Nnaji was born on 3 May 1979 in Imo state and is the richest actress in Nigeria.

She attended the University of Lagos and graduated with a bachelor’s degree in creative arts. She is an actress, producer, and singer.

Genevieve started to act at the age of eight in 1998 when she starred in Ripples, a Television soap opera.  She went on to feature in major movies in Nollywood like Most Wanted, Ijele, Mark of the beast and Ije: The Journey. She is a hardworking actress and has acted in over 200 movies.

In 2004, Genevieve came out with her debut album titled one Logologo line, a Hip Hop, R&B, and Urban Modern Music.

She has many awards and one of which includes the Best Actress in a Leading Role in the 2005 Africa Movie Academy Award (AMAA).

Due to dedication, the Federal Government of Nigeria gave her the Member of the Order of the Federal Republic (MFR).

In 2015, Genevieve became a producer and released her first movie titled Road To Yesterday, which won an award as Best overall movie in West Africa.

Genevieve Nnaji is not only a world-class actress but also a producer of international repute as in September 2018, Netflix bought the streaming rights of the film she directed titled “Lion Heart.”

She owns a Fashion Label called St. Genevieve and is said to donate proceeds of that clothing line to charity.

In 2020 her film titled “Lion Heart” was the First Nigerian Film to be nominated for an Oscar Award in the Best International Feature Film category. But the organizers disqualified it on the ground that the producers did the dialogue track in English instead of it being a non-English track.

Also, she had endorsements from top brands in Nigeria, and Genevieve Nnaji is the richest actress in Nigeria with a net worth estimated to be up to $5.555 million.

Ibinabo Fiberesima was born in Port Harcourt on 13 January 1970.

She participated in the Miss Nigeria Pageant in 1991 and was the first runner up. In 1997, she competed for Miss Wonderful and won. This ex Beauty Queen holds a Bachelor of Arts Degree in English and Literature from the University of Ibadan.

Ibinabo became a Nollywood actress in 1997, and her first movie was Most Wanted in 1998.  She has acted in films like The Ghost, Ladies Night, The Limit, Letters to a stranger, and Pastors wife, to mention but a few. She is an ex-president of the Actors Guild of Nigeria and ran an event planning business.

She attended Moshood Abiola Polytechnic and got an Ordinary National Diploma in Mass Communication. She is an actress and movie producer and performs in Yoruba and English films.

Olafunke started her acting career in 1998 sitcom sponsored by United Nations Population Fund UNFPA titled I need to know. In 2008, Funke performed in a movie titled Jenifa and featured in the Comedy titled Moms at War.

Funke has won many awards in Nigeria and Internationally, such as the Best Actress in Leading Role as Jenifer at the Africa Movie Academy Award 2009.

She currently has a popular TV show titled Jenifa’s Diary, where she plays the lead actress. Also, Funke is the CEO of Scene One Film Production and, in 2019, directed a Yoruba drama movie titled Your Excellency.

Funke is an influential person proven by the number of Instagram followers which is over 10 million.

As of 2020, Funke has endorsements of some notable brands, and her net worth today is about $3.5 million.

Stephanie Onyekachi Okereke was born in Imo state on 2 October 1982. Stephanie attended the University of Calabar and graduated with a degree in English and Literary Studies.

She began her Nollywood acting career in her teens in 1997 and starred in two movies Compromise 2 and Waterloo and has acted in over 90 films to date. She has many awards that include Best Actress English award in Reel Awards 2003.

Stephanie contested for the Most Beautiful Girl in Nigeria Pageant in 2002 and was the second runner up.

She graduated from the New York Film Academy in 2007 and released a movie titled Through the Glass. In that movie, Stephanie was an actress, scriptwriter, producer, and director, and the movie was nominated for an award at the Africa Movie Academy Awards.

In 2014, Stephanie released another film titled Dry, and in it, she was also an actress, scriptwriter, producer, and director, and the movie won some awards.

Likewise, in 2014, the Federal government of Nigeria presented Stephanie Onyekachi Okereke with the Member of the order of the Federal Republic MFR.

Her net worth is estimated to be  $3.2 million.

Omotoloa Jalade Ekeinde was born on 7 February 1978 in Lagos state. This actress, musician, Tv show host and philanthropist, is believed to have attended Yaba College of Technology and studied Estate Management.

Omotola began her acting career in 1995 with the role in a Movie titled Venom of Justice. Omo Sexy, as her fans call her, got a big opportunity in acting in the lead role of that movie. Subsequently, she got another leading role in Mortal Inheritance in 1995, rated as one of the best films in Nollywood.

Omotola is hardworking, and movie producers value her craft, allowing her to perform in several hit movies like The Woman in Me, and the Blood Sisters, and so on.

She has acted in over 300 films to date and, in 2010, got a role to perform in a Motion pictures film titled Ije, which was a huge success. She has countless awards, one of which includes Best Actress English for Mortal Inheritance in The Movie Awards (THEMA) in 1997.

She is not only an actress but also a singer and released her debut album titled in Gba in 2005, and two singles in 2014 and 2015. Omotola also had a reality Tv show Omotola: The Real Me on Africa Magic Entertainment in 2012.

In 2013, Omotoloa Jalade Ekeinde was among the 100 most influential people in the world, according to Time Magazine. Omo Sexy is said to have over 3 million followers on Facebook.

In 2014, the Federal Government of Nigeria, awarded her a Member of the Order of Federal Republic (MFR), for her contribution to the Nigeria film Industry.

Her net worth is about $3 million.

Beautiful Rita Dominics Nwaturuocha was born on 12 July 1975 in Imo state. Rita attended the University of Port Harcourt and graduated with a Bachelor of Arts in Theatre Arts.

She started performing from her childhood acting in children Television shows in Imo State. Rita debuted for her first Nollywood movies in 1998 in A Time to Kill, and to date, she has performed in more than 100 films.

Rita has won many awards for her dexterity in Nollywood. One of her awards includes the Best Actress in a Leading Role for Shattered in the 8th Africa Movie Academy Award 2012.

Mercy Johnson was born on 28 August 1984 in Lagos state. She started acting in 2004 and debuted with a role in the Maid. Some of her notable film performances include Baby Oku in America, War in the Palace, and Hustlers. As of now, she has acted in more than 100 movies.

In 2009, Mercy Won the Best supporting actress for her role in Live to Remember in the best of Nollywood Awards. In 2018, she won Actress of the Year Award for her role in Seven and Half Dates given by Eloy Awards, among many others.

She had endorsements with some big Nigerian brands. Her projected net worth is $2.3 million.

Uche Jumbo Rodriguez was born on 28 December 1979 at Abia State and attended the University of Calabar and studied Mathematics and Statistics. .

Uche started acting in 1999 and debuted in a Movie titled Visa to Hell and has performed in over 200 films. She is now a veteran Nollywood actress and doubles as scriptwriter and producer.

She wrote or collaborated in the writing of movies like Games Men Play and Celebrity, and so on. Some of the films she produced include  Nollywood Hustlers, Holding Hope, and Damages.

Uche Jumbo has also directed some films like How I saved My Marriage and Lost in Us. She has won many awards like the Best Actress in the Afro Hollywood Awards UK in 2008.

The next star on this list of the richest actresses in Nigeria is Chioma Chukwuka Akpotha, and she ranks as number 9.

Chioma was born on 12 March 1980 in Lagos state. She started acting in the year 2000 and plays romantic roles excellently. She studied banking and Finance at the Lagos State University.

She debuted in The Apple in the year 2000 and has performed in many celebrated movies in Nollywood. This actress won the Africa Movie Academy Award in 2007 for Best Actress in a lead role. Chioma has played in more than 350 Nollywood movies.

Chioma is equally a movie producer and has produced several films including On Bended Knees in 2013 and Dark Cloud in 2019.

Some of the films she featured include Wives on Strike, On my Wedding day, The rain of Hop, and Heart of Gold. To reward her acting prowess, the African Movie Academy Awards presented her with the Best Actress in a Leading Role.

Chioma has endorsements from major brands in Nigeria and invested some of her earning in real estate. She is said to own two big mansions in Lagos worth about ₦25 million each.

Her estimated net worth is $2 million.

At number 10 is the gorgeous Ini Edo, who was born on 23 April 1982, in Uyo Akwa Ibom state. She attended the University of Uyo and got a diploma in Theatre Arts and went on to the University of Calabar to obtain a degree in English. She started acting in the year 2000 and has performed in more than 200 movies. She debuted in 2003 in Thick Madam.

Ini Edo became well known in 2004 when she acted in World Apart. She featured in I will take my chances in 2011 and the patient Nurse in 2017.

Some of her awards include Best Actress for a Leading Role (Yoruba) in the Best of Nollywood Awards in 2009. Ini Edo also won Best Actress Award in the 2018 ZAFAA Global Awards.

She has endorsement with some big brands and has massive following on social media. Ini, runs a thriving business in Lekki, Lagos Nigeria.

This post brought you the richest actresses in Nigeria. After the review, Genevieve Nnaji ranks at the top as number one closely followed by Ibinabo Fiberesima in the second position.

We hope this register of the wealthiest women actors in Nigeria, serves as motivation for you to be the best in your chosen profession.

How to become a Nollywood Actor or Actress