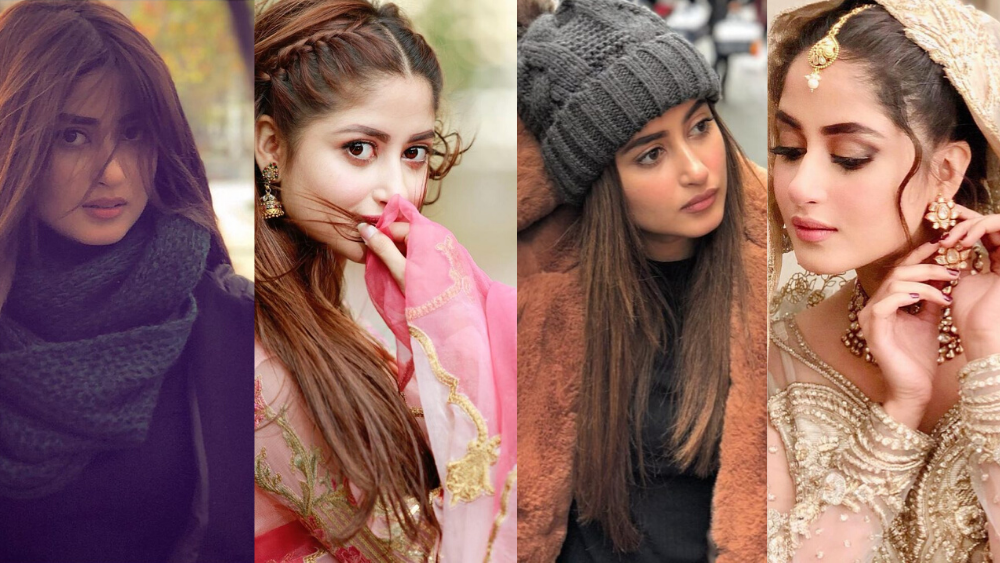 When it comes to the showbiz industry, not many have taken baby-steps to achieve the heights of fame they have got. Sajal Aly is among the few who have worked the hardest. Despite all her struggles and hardships, she stayed true to who she was; A hardworking, career-driven woman.

So, without further ado let’s go through the story of Sajal Aly.

Sajal Aly was born on January 17th, 1994, in a Punjabi family. The city of Lahore, Pakistan is her hometown.

The actress prefers to stay in good shape; She is constant at the gym and takes good care of her diet. She weight at about 52 kgs or 115 pounds.

Sajal got her high school education from the renowned school Lahore Grammar School. After that, the Lahori actress went on to study at Beacon House for her college studies.

Sajal Aly dated Ahad Raza Mir for a while before finally tying the knot in 2020. Ahad is the son of the famous Asif Raza Mir. His father was famously known for his acting in Tanhaiyaan.

The famous on and off-screen couple first appeared on the show Yaqeen Ka Safar as a couple. Their presence together and undeniable chemistry was witnessed by all their fans and viewers. The two of them made a great pair, and soon brands like Coco-Cola took notice.

After winning the hearts of fans everywhere in Pakistan, the two of them worked on two other drama serials; Aangan and Yeh Dil Mera.

And if that wasn’t enough to melt the hearts of their fans, the two appeared on bridal photoshoots for big brands together. Everyone started rooting for them to get married.

Let’s take a look at the picture from this fan-favorite couple’s engagement day.

Sajal Aly and Ahad Raza Mir finally tied the known on March 14th, 2020. Their marriage ceremony took place in Abu Dhabi. However, due to the coronavirus outbreak, the couple did not get a chance to travel for a honeymoon.

Her sister Saboor Aly, although older, joined the showbiz industry after Sajal. Saboor is engaged to Ali Josh and they make for a beautiful couple.

Her immediate family consists of her parents, an elder sister, and a younger brother. Her mother passed away 3 years ago, in 2017. She is now also an important part of the Mir family.

Sajal did not keep her fans in the dark when it came to some of her life’s struggles. She opened up about there being problems between herself and her father. The actress despised her father for leaving her mother when she needed him the most.

However, the two of them have been mending their relationship and her father appeared as an important member of the family on her wedding day.

Sajal and Saboor Aly are both very close to the youngest member of their immediate family, their brother. He is currently in Australia for his education.

The popular pair first appeared on drama serial Gul-e-Rana, and soon became famous for their bond. They’ve also worked together in the movie Zindagi Kitni Haseen Hai. However, things did not end well between the two stars.

The famous star got her first movie debut in the movie Mom, where she played the role of late Sri Devi and Adnan Siddiqui’s daughter.

She’s appeared on two movies as of yet; one of them is the aforementioned Mom and the other is the Pakistani movie Zindagi Kitni Haseen Hai.

The actress has worked as the main lead in the telefilm Behad. Sajal worked on this project alongside Fawad Khan and Nadia Jamil.

When it comes to dressing up for the occasion, many fans look up to Sajal. She can pull off both, western and eastern outfits gorgeously. she really knows how to carry herself in each look.

Let’s take a look at some of the pictures where her style was on-point.

That’s everything you need to know about the famous actress and model Sajal Aly.

Did we miss out on anything? Let us know in the comments section!