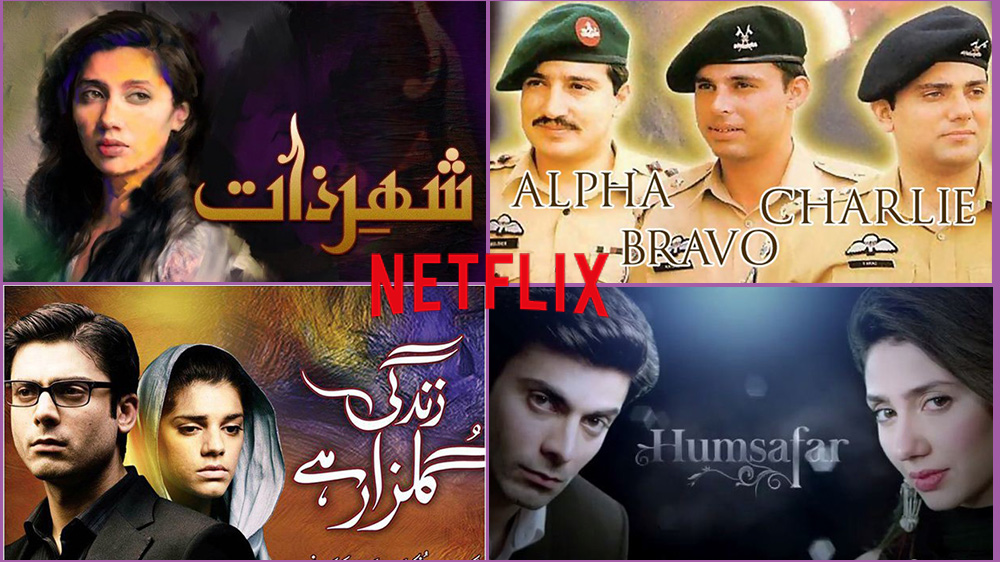 Who doesn’t like to unwind after a long day at work in front of the TV? For bingewatching TV series fans there’s another reason to check out Netflix. The online video platform is continuously bringing in new content for its subscribers. And now, you can watch Pakistani dramas on Netflix too.

Pakistani TV serials are all about great content, thoughtful plots and acting par excellence. All these things give them an edge over the typical daily soaps that tend to kill our grey cells. Netflix has made sure to list some of the most popular Pakistani TV dramas for its subscribers here.

Here is the complete list of all the Pakistani dramas on Netflix that you can start watching right now. We’re sure you’ll find them riveting too!

One of the best Pakistani dramas ever made, Zindagi Gulzar Hai stars Fawad Khan and Sanam Saeed in lead roles.

The show is about two individuals who are completely opposite to each other and have different backgrounds. Somehow, they make it work despite all odds.

Pakistani Movies On Netflix You Can Watch Right Now

In the TV serial, Mahira has played the role of a rich woman who loses herself after she finds out that her own partner is cheating on her.

In this TV serial, Mahira played the role of a small town girl who strongly believes in child marriages and falls in love with her cousin Khali ur Rehman (played by Adnan Malik).

Qaid-e-Tanhai is about a couple who experience troubles in their marriage, with the husband deciding to leave the country and marrying a second time.

When his wife decides to do the same, she’s considered a sinner in the eyes of society.

Mora Piya has won kudos for its mature themes.

This is the story of a journalist whose wife is raped by a gangster. After she gets pregnant, she refuses to give up the child. Does her husband accept this? Watch the drama to find out.

Pakistani drama Meri Zaat Zarra e Benishan is about a woman who is wrongfully accused of adultery.

Her daughter from her second marriage later finds the truth about her mother as she herself gets married into the same family.

This Pakistani drama takes you through the journey and hardships faced by a woman (Sanam Baloch) who decides to leave her husband (Fahad Mustafa) because of his violent and unbearable behavior.

Maat (which means defeat) is a teledrama which revolves around the lives of sisters Aiman and Saman from a lower middle-class family.

After facing rejection from Saman, Faisal (Adnan Siddiqui) decides to marry her sister Aiman who is kind-hearted and polite. However, despite being married to her, Faisal remains attracted to Saman. What happens next?

Netflix is Begging Users Not to Do the #BirdBoxChallenge

Humsafar is one of the most successful Pakistani TV serials in recent history. This drama even aired in India.

The show introduced us to the handsome Fawad Khan and the beautiful Mahira Khan.

Daastaan portrays the love story of a nation and its countrymen featuring Fawad Khan and Sanam Baloch as its leads.

The TV serial has a wonderful script and an amazing star cast that complements the script. This show is a must watch.

This Pakistani serial features a story of two female best friends who experience a rift.

Daam looks at the price for rejecting a marriage proposal sent by one of the friend’s brother.

This evergreen drama is based on the life of three army men, Faraz, Kashif, and Gulsher, also known as Alpha, Bravo, and Charlie respectively.

These passionate young men wish to start their careers in the Pakistan army. They end up facing the bitter reality of life in all its fragility, in the form of jealousy, heartbreaks, trauma, and death.

With these Pakistani dramas on Netflix, we can look forward to some long binge-watching sessions.