The 20 Most Powerful Indians In Hollywood

Aziz Ansari is his own franchise. 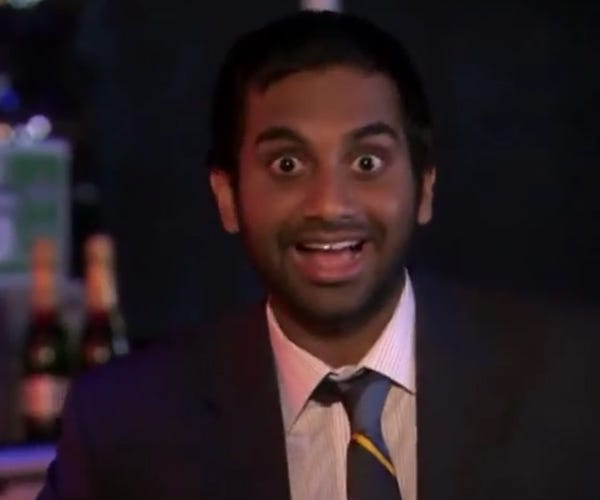 The Indian actor has created one of the most hilarious and memorable characters on television right now: Tom Haverford on NBC’s “Parks and Recreation.”

Ansari has also had bit roles in movies like “Get Him to the Greek” and “Funny People.” But now he’s getting a lead role in the buddy-robbery comedy “30 Minutes or Less” with Jesse Eisenberg.

Ansari also has a successful stand-up special, “Dangerously Delicious,” on his website, which only costs $5 to download. 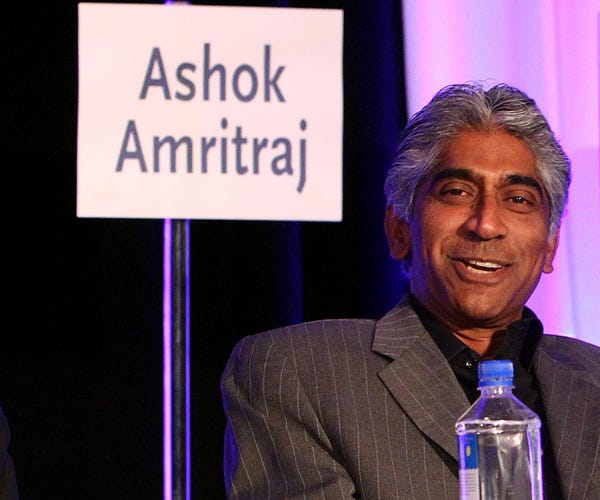 If you’ve ever watched a movie from Hyde Park Entertainment, then you know Ashok Amritraj’s work.

Since the mid 1980s, Amritraj has produced more than 100 films, from “Ghost Rider” to “Bringing Down the House,” to “The Boondock Saints.”

Amritraj also sat on the board of the Motion Picture and Television Fund as well as managing National Geographic Films.

In 20 years, Irrfan Khan has worked on 75 films and TV shows. 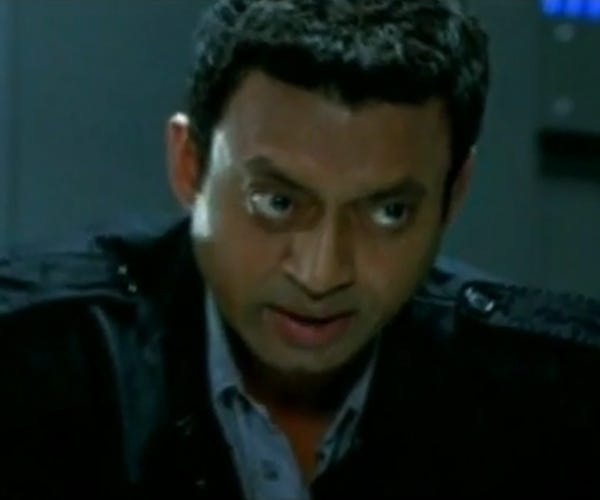 During his over 20-year Bollywood career, Irrfan Khan has made quite a few trips to Hollywood.

Irrfan started his American movie career with “A Mighty Heart,” “The Darjeeling Limited” and “The Namesake.” The latter garnered Irrfan an Independent Spirit Award for Best Supporting Actor.

Then 2008 brought “Slumdog Millionaire.” The Danny Boyle film won Best Picture at the Oscars and led to a guest-starring role on the HBO show “In Treatment.” His upcoming movie projects include “The Amazing Spider-Man” in July and Ang Lee’s adaptation of “Life of Pi” in December.

Anil Kapoor has been getting consistent work in the action genre. 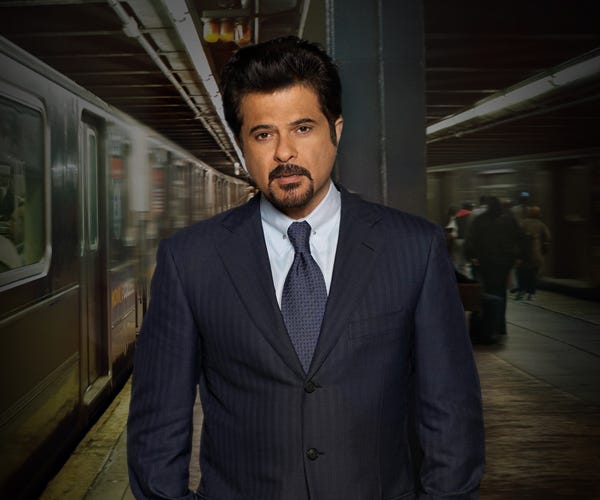 Anil Kapoor made some noise as the host of “Who Wants to Be A Millionaire” in “Slumdog Millionaire.” He’s the one who rats out Jamal to the authorities for cheating.

After Slumdog, Kapoor landed a role on the thriller “24.” His character was the president of a fictional country who is targeted for assassination.

Then he filmed “Mission Impossible: Ghost Protocol” with Tom Cruise. Next he’ll be teaming up with Kirsten Dunst, Orlando Bloom and more for the new thriller “Cities.”

Hannah Simone: the other “new girl.” 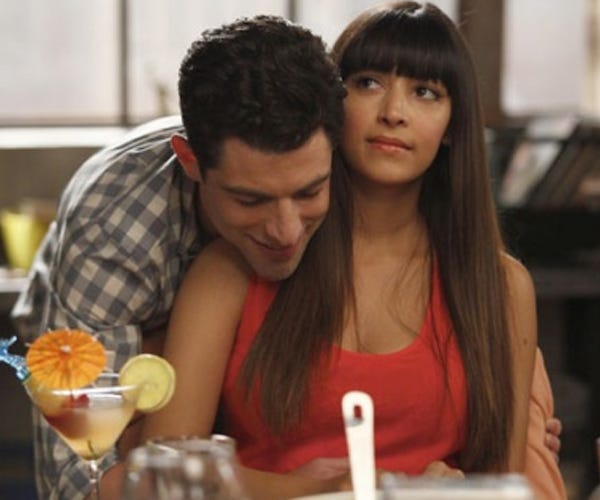 Hannah Simone was born in London and has lived in Greece, Canada, India and the U.S. She’s half Indian and half German/Greek.

She started off as a model but Hannah Simone and VJ-ed for “MuchMusic” in Canada and on the SyFy show “WCG Ultimate Gamer” before landing the role of model/best friend of Zooey Deschanel in “New Girl.”

Simone’s Cece and her relationship with Max Greenfield’s hilarious Schmidt makes up some of the best laugh-out-loud bits on that show. (To learn more about the sizzling actress, click here.)

M. Night Shyamalan: still one of Hollywood’s most acclaimed directors. 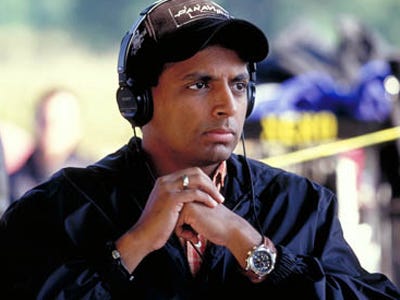 M. Night Shyamalan has arguably not made a good movie since “The Sixth Sense.”

But the fact that he keeps getting interest from high-profile actors and keeps obtaining giant budgets for his films means he’s clearly doing something right. And no matter how terrible his movies have become, no one can say Shyamalan is not ambitious.

The polarizing director is coming out with another thriller next year called “After Earth.” It stars Will and Jaden Smith as a father and son who explore an alien planet after a crash landing. 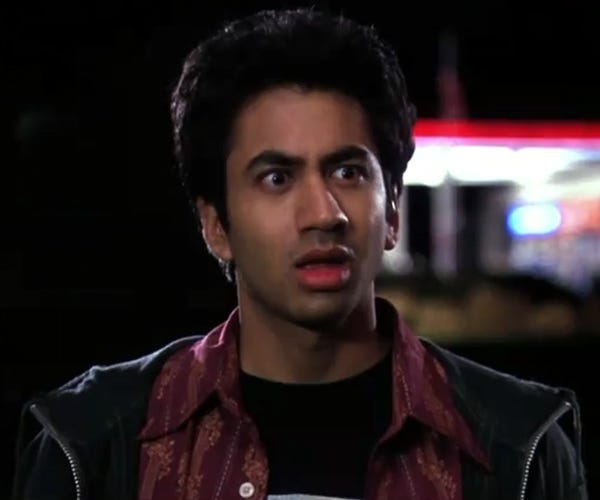 From the first moments of “Harold and Kumar Go To White Castle,” it was obvious that Kal Penn, aka Kumar, was going to be a fan favorite.

He is now one of the best-known Indian actors in Hollywood following the “Van Wilder” series and TV stints on “24,” “House” and recently “How I Met Your Mother.”

Penn also worked as the associate director of the White House Office of Public Engagement for a year and was recently offered another job with Obama as a co-chair on the POTUS’ re-election campaign.

“The office” star Mindy Kaling now has her own show airing on FOX this fall. 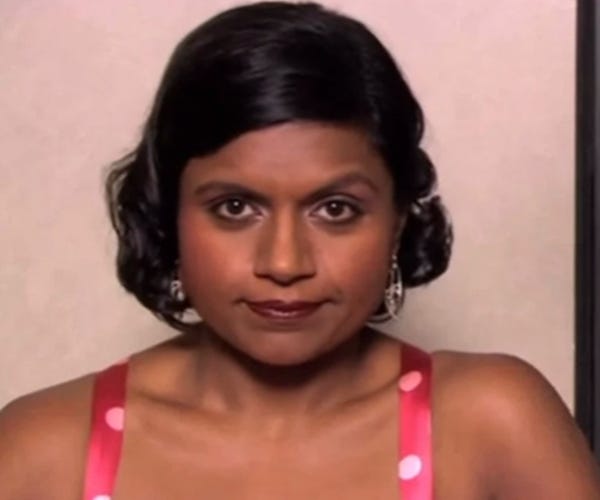 Mindy Kaling is one of the hottest TV writers/actors right now. “The Office” star has written and starred in many of the best episodes of the series, including season two’s “The Dundies,” “The Injury” and the wedding episode “Niagara.”

Her movie credits include roles in “The 40-Year-Old Virgin,” “No Strings Attached” and “The Five-Year Engagement.”

She’s also written a best selling book: “Is Everyone Hanging Out Without Me?”

Now Kaling is getting her own show that she is also writing and starring in called “The Mindy Project.” It airs this fall on Fox. 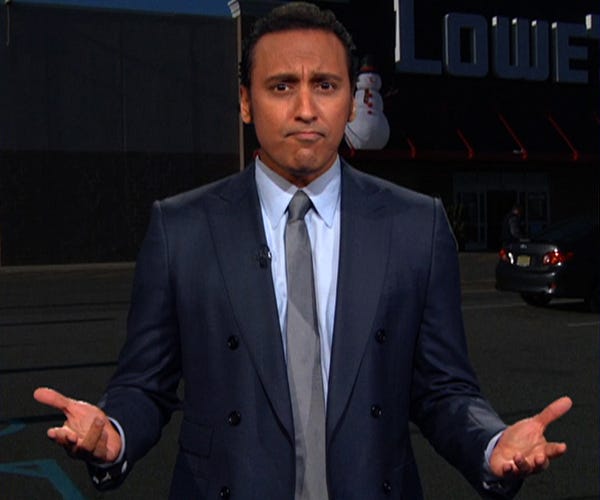 Since the early 90s, India-born Aasif Mandvi has been playing bit roles in various big films. He was a cab driver in “Die Hard with a Vengeance” and a doctor in “Analyze This.” He even worked on the TV shows “Jericho” and “Sleeper Cell.”

But in 2006, Jon Stewart hired Mandvi has a correspondent for “The Daily Show” and Mandvi hit the big times.

Since then, Mandvi has made appearances in films like “Ghost Town,” The Last Airbender” and “Margin Call.” Now his name is just a little bit higher in the credits. 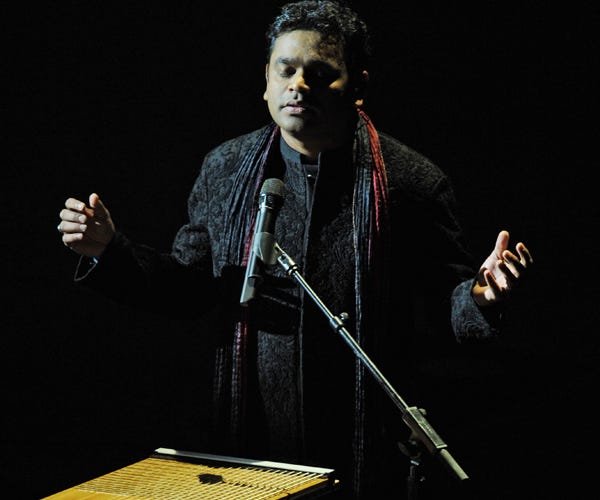 The award-winning composer for Bollywood films debuted in Hollywood with the 2007 film “Elizabeth: The Golden Age.”

He then scored “Slumdog Millionaire,” which won both Best Original Score and Best Song for “Jai Ho.”

Rahman was nominated for two more Oscars for “127 Hours,” in which he performed “If I Rise” with Florence Welch of Florence and the Machine. His music will also be heard in the 2012 film “People Like Us.” 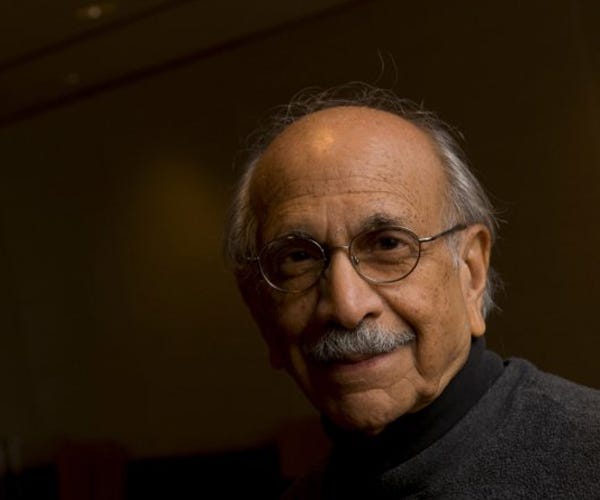 Noël de Souza spent years trying to break through in Hollywood but he only got roles playing Hispanic characters.

He ultimately changed careers to journalism and became a member of the Hollywood Foreign Press, aka the people who vote on the Golden Globes. De Souza is currently the only member of the association to represent India.

Archie Panjabi: the sister from ‘Bend It Like Beckham’ is all grown up. 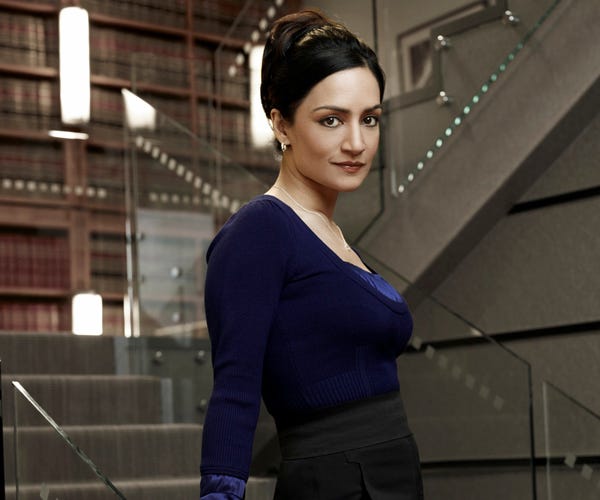 Archie Panjabi, who played the sister in “Bend It Like Bekham,” landed a plum role in the CBS drama “The Good Wife” opposite Julianna Marguiles and Josh Charles.

The actress plays completely against the Indian type: she’s a bi-curious, private investigator for the law firm where Marguiles’ Alicia Florrick works.

Producer Anadil Hossain has a foot in both worlds. 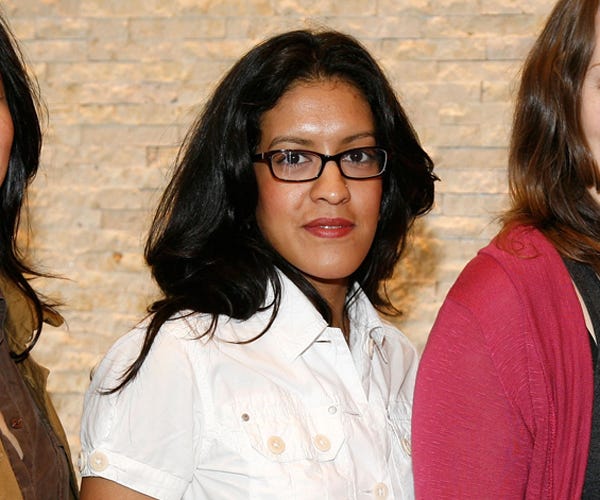 In 2006, Hossain produced the popular Bollywood movie “Kabhi Alvida Naa Kehna,” while also tackling line production duties for another Indian film in English: “The Namesake.” She also had a hand in getting the CIA drama “Fair Game” to the big screens.

Anil Ambani is as powerful as Steven Spielberg on the entertainment business side. 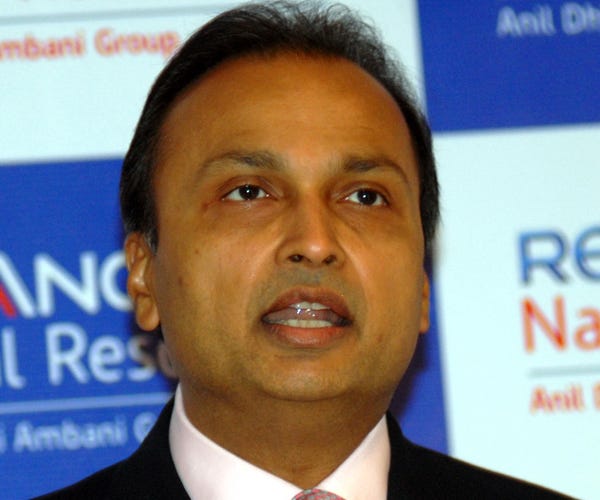 As the chairman of the Reliance Anil Dhirubhai Group (including Reliance Industries led by Anil’s brother Mukesh), Ambani owns 50 percent of Dreamworks Pictures which puts him in partnership with big-wig director Steven Spielberg. 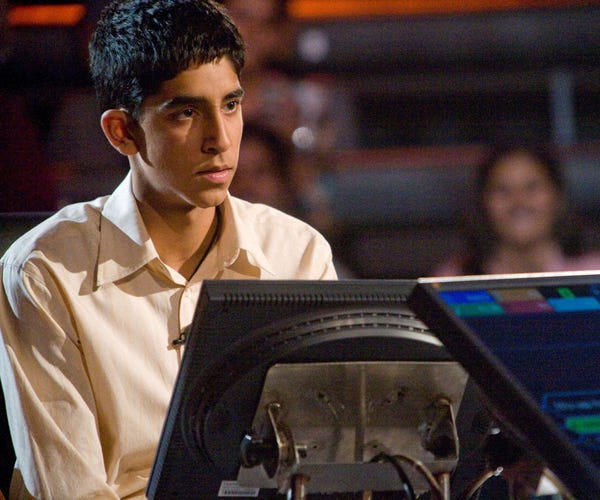 After Dev Patel appeared in the Best Picture-winning “Slumdog Millionaire” he lined up several projects including the M. Night Shyamalan film “The Last Airbender” to Aaron Sorkin’s new HBO show “The Newsroom.” 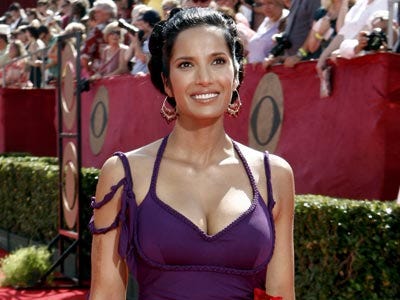 South Indian-born Padma Lakshmi started her career at 18 as a model. She dabbled in acting in Italian and English films, and then transitioned into writing cookbooks and hosting Food Network shows like “Padma’s Passport” and “Planet Food.”

Lakshmi is now the face of “Top Chef.”

Tarsem Singh makes all of those movies that feel like acid trips. 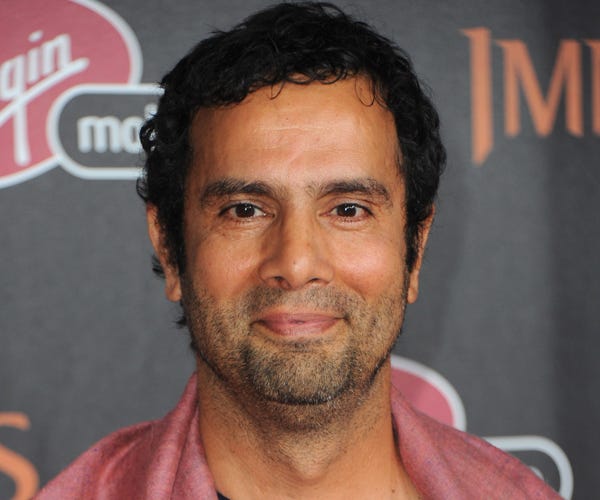 The Punjab-born director has made a name for himself with films like the Jennifer Lopez-serial killer thriller “The Cell” and the beautiful, epic “The Fall.”

Singh started as a director of music videos for groups like En Vogue and R.E.M.

Jay Chandrasekhar is the brain behind The Broken Lizard. 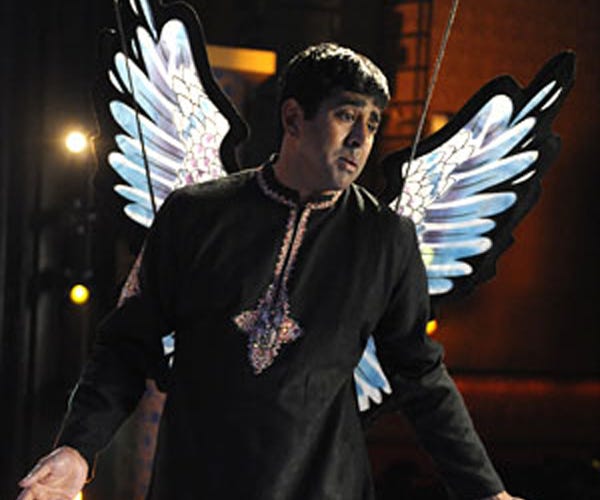 Before he made it big, Jay Chandrasekhar started a little comedy troupe called the Charred Goosebeak.

That became The Broken Lizard, which produced films like “Super Troopers,” “The Dukes of Hazzard” and “Beerfest.” Chandrasekhar also guest directs for TV shows like “Arrested Development” and “Chuck.” 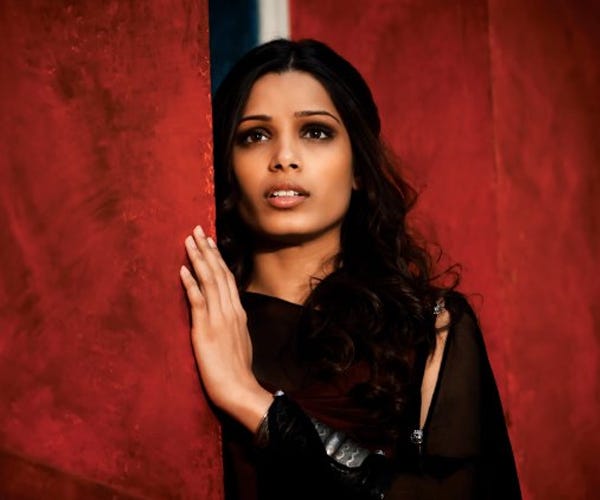 After the success of the Oscar-winning film, Freida Pinto got a lot of attention in the acting and modeling world.

The Mumbai-born actress was originally acting in India but quickly turned to Hollywood with roles in Woody Allen films, “Rise of the Planet of the Apes,” Tarsem Singh’s “Immortals” and this year’s “Tess of D’Ubervilles” Indian remake “Trishna.”

BONUS: Here are some other successful South Asians in the biz. 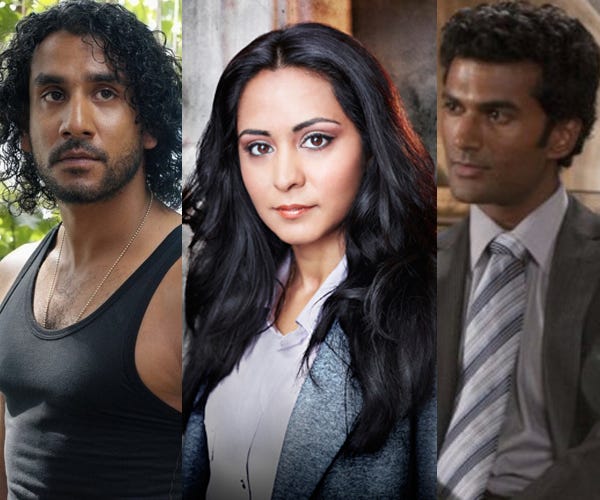 Here are several other names you should know:

Now let’s look at some dropouts … 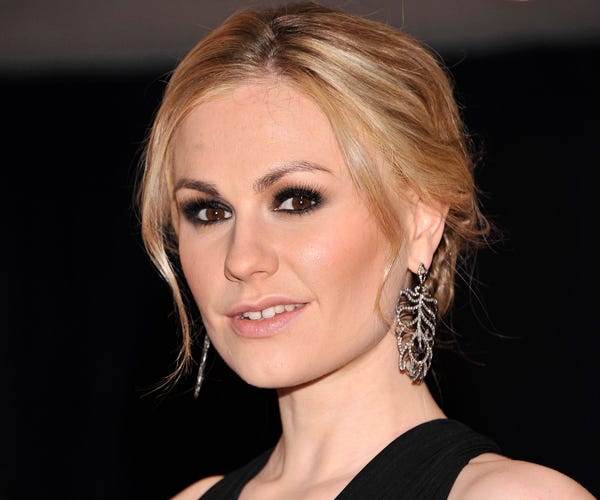 1) The 20 Most Powerful Indians In Hollywood
2) Aziz Ansari is his own franchise.
3) Ashok Amritraj has produced more than 100 films.
4) In 20 years, Irrfan Khan has worked on 75 films and TV shows.
5) Anil Kapoor has been getting consistent work in the action genre.
6) Hannah Simone: the other “new girl.”
7) M. Night Shyamalan: still one of Hollywood’s most acclaimed directors.
8) Actor Kal Penn is also a co-chair of Obama’s re-election campaign.
9) “The office” star Mindy Kaling now has her own show airing on FOX this fall.
10) Aasif Mandvi: Jon Stewart’s “Muslim Correspondent.”
11) A.R. Rahman is India’s first double-Oscar winner.
12) Noël de Souza came a long way from “Old Indian Man” in “Wedding Crashers.”
13) Archie Panjabi: the sister from ‘Bend It Like Beckham’ is all grown up.
14) Producer Anadil Hossain has a foot in both worlds.
15) Anil Ambani is as powerful as Steven Spielberg on the entertainment business side.
16) Dev Patel: another “Slumdog” graduate.
17) Padma Lakshmi rules the Food Network.
18) Tarsem Singh makes all of those movies that feel like acid trips.
19) Jay Chandrasekhar is the brain behind The Broken Lizard.
20) Freida Pinto: muse of Woody Allen.
21) BONUS: Here are some other successful South Asians in the biz.
22) Now let’s look at some dropouts …