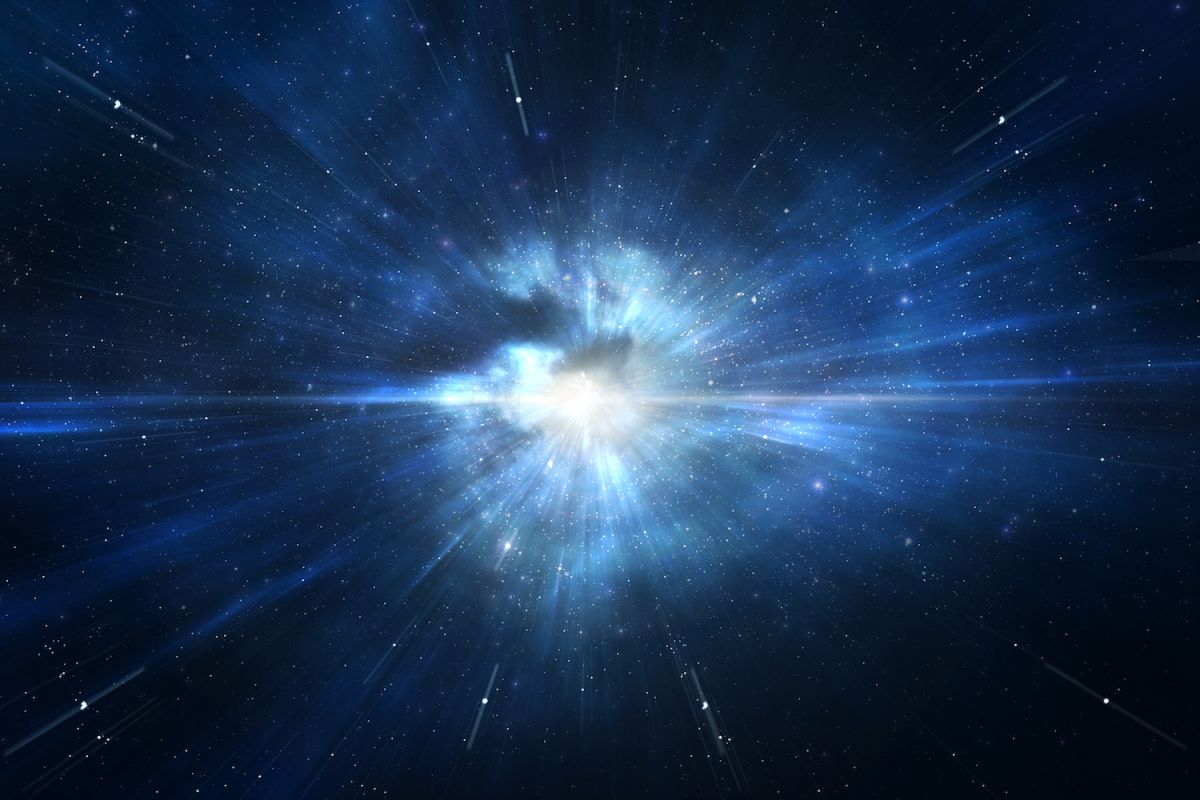 The Big Bang theory represents cosmologists’ best attempts to reconstruct the 14 billion year story of the universe based on the sliver of existence visible today.

Different people use the term “Big Bang” in different ways. Most generally, it illustrates the arc of the observable universe as it thinned out and cooled down from an initially dense, hot state. This description boils down to the idea that the cosmos is expanding, a broad principle analogous to survival of the fittest in biology that few would consider debatable.

More specifically, the Big Bang can also refer to the birth of the observable universe itself — the moment something changed, kickstarting the events that led to today. Cosmologists have argued for decades about the details of that fraction of a second, and the discussion continues today. [From Big Bang to Present: Snapshots of Our Universe Through Time]

For most of human history, observers of the sky assumed it eternal and unchanging. Edwin Hubble dealt this story an experimental blow in the 1920s when his observations showed both that galaxies outside the Milky Way existed, and that their light appeared stretched — a sign that they were rushing away from Earth.

George Lemaître, a contemporary Belgian physicist, interpreted data from Hubble and others as evidence of an expanding universe, a possibility permitted by Einstein’s recently published field equations of general relativity. Thinking backwards, Lemaître inferred that today’s separating galaxies must have started out together in what he called the “primeval atom.”

The first public use of the modern term for Lemaître’s idea actually came from a critic — English astronomer Fred Hoyle. On March 28, 1949, Hoyle coined the phrase during a defense of his preferred theory of an eternal universe that created matter to cancel out the dilution of expansion. Hoyle said the notion that “all matter of the universe was created in one big bang at a particular time in the remote past,” was irrational. In later interviews, Hoyle denied intentionally inventing a slanderous name, but the moniker stuck, much to the frustration of some.

“The Big Bang is a really bad term,” said Paul Steinhardt, a cosmologist at Princeton. “The Big Stretch would capture the right idea.” The mental image of an explosion causes all kinds of confusion, according to Steinhardt. It implies a central point, an expanding frontier, and a scene where light shrapnel flies faster than heavier chunks. But an expanding universe looks nothing like that, he said. There’s no center, no edge, and galaxies large and small all slide apart in the same way (although more distant galaxies move away faster under the cosmologically recent influence of dark energy).

Regardless of its name, the Big Bang theory found widespread acceptance for its unparalleled ability to explain what we see. The balance of light with particles like protons and neutrons during the first 3 minutes, for instance, let early elements form at a rate predicting the current amounts of helium and other light atoms.

“There was a small window in time where it was possible for nuclei to form,” said Glennys Farrar, a cosmologist at New York University. “After that, the universe kept expanding and they couldn’t find each other, and before [the window] it was too hot.”

A cloudy plasma filled the universe for the next 378,000 years, until further cooling let electrons and protons form neutral hydrogen atoms, and the fog cleared. The light emitted during this process, which has since stretched into microwaves, is the earliest known object researchers can study directly. Known as the cosmic microwave background (CMB) radiation, many researchers consider it the strongest evidence for the Big Bang.

But as cosmologists pushed farther back into the universe’s first moments, the story unraveled. General relativity’s equations suggested an initial speck of unlimited heat and density — a singularity. In addition to not making much physical sense, a singular origin didn’t match the smooth, flat CMB. Fluctuations in the speck’s formidable temperature and density would have produced swaths of sky with different properties, but the CMB’s temperature varies by just a fraction of a degree. The curvature of space-time also looks quite flat, which implies an initially near-perfect balance of matter and curvature that most cosmologists find improbable.

Alan Guth proposed a new picture of the first fraction of a second in the 1980s, suggesting that the universe spent its earliest moments growing exponentially faster than it does today. At some point this process stopped, and putting on the brakes produced a dense and hot (but not infinitely so) mess of particles that takes the place of the singularity. “In my own mind I think of that as the Big Bang, when the universe got hot,” Farrar said.

The inflation theory, as it’s called, now has a plethora of competing models. Although no one knew much about what made the universe expand so rapidly, the theory has grown popular for its ability to explain the seemingly improbable featureless CMB: Inflation preserved minor fluctuations (which developed into today’s galaxy clusters), while flattening the major ones. “It’s a very sweet story,” Steinhardt said, who helped develop the theory. “It’s the one we tell our kids.”

Recent research has introduced two wrinkles into the inflation theory’s cosmic narrative. Work by Steinhardt and others suggests that inflation would have stopped in some regions (such as our observable universe) but continued in others, producing an array of separate territories with “every conceivable set of cosmological properties,” as Steinhardt puts it. Many physicists find this “multiverse” picture distasteful, because it makes an infinite number of untestable predictions.

On the experimental front, cosmologists expect that inflation should have produced galaxy-spanning gravitational waves in the CMB just as it produced slight temperature and density variations. Current experiments should be sensitive enough to find them, but the primordial space-time ripples haven’t shown up (despite one false alarm in 2014).

Many researchers await more precise CMB measurements that could kill, or validate, the many inflation models that still stand. Other physicists, however, don’t see the cosmos’s smoothness as a problem at all — it started off uniform and needs no explanation.

While experimentalists strive for new levels of precision, some theorists have turned away from inflation to seek other ways to squash the universe flat. Steinhardt, for instance, is working on a “big bounce” model, which pushes the starting clock back even further, to an earlier period of contraction that smoothed space-time and set the stage for an explosive expansion. He hopes that before too long, new signatures, in addition to problems like the lack of primordial gravitational waves, will set cosmologists up with a new creation story to tell. “Are there any other observable features to look for?” Steinhardt said, “Ask me again in a few years and I hope to have an answer.”