The Cricket Legend Don Bradman
Don Bradman: Cricket Legend
Greatest Sporting Achievements
Why Was He So Good?
What You May Not Know
Was he a legend?
“The ghost of a once great cricketer”

Sir Donald George Bradman, AC (August 27, 1908 – February 25, 2001), also known as “The Don”, was an Australian cricket player, regarded as the greatest cricket player of all time and one of Australia’s greatest popular heroes. Though he received many criticisms in his first Ashes series in 1928-1929, he was determined and continued to persevere. Bradman played for the New South Wales (1927-1934) and South Australia (1935-1949).

Donald Bradman is said to be the greatest batsman to ever grace cricket. His test average continues to be far above than anyone else’s. Before he even turned 22, he already set many records for top scoring. His statistical achievements were unparalleled in his 20-year career span. His highest international score (334) stood for decades. He finished with a test average of average 99.94. He was the only player with two Test triple centuries in a career. He was inducted into the ICC Cricket Hall of Fame in 2009.

Bradman received the nation’s second-highest civilian honor in June 16, 1979 – Companion of the Order of Australia (AC), “in recognition of service to the sport of cricket and cricket administration”. 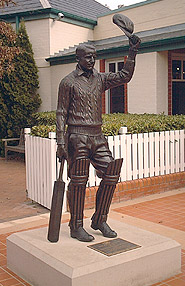 Why Was He So Good?

The Don was complex, highly-driven and he had a deep and undying love for cricket. He became a national icon. Prime Minister John Howard of Australia in 2001 even called him the “greatest living Australian”. He was so far ahead of the competition as to leave comparisons meaningless and to excel the game he graced. During his career years, he changed the history of cricket. Most of his records up to this date are still unbeaten.

What You May Not Know

Was he a legend?

Do you agree with Don Bradman being a legend of cricket?

“The ghost of a once great cricketer” 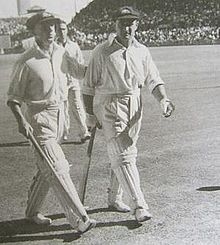 Bradman and Barnes leave the field for an adjournment as both head towards 234. 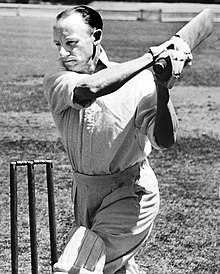 Bradman during an interstate series at Adelaide Oval, 31 October 1946.

In 1945–46, Bradman suffered regular bouts of fibrositis while coming to terms with increased administrative duties and the establishment of his business. He played for South Australia in two matches to help with the re-establishment of first-class cricket and later described his batting as “painstaking”. Batting against the Australian Services cricket team, Bradman scored 112 in less than two hours, yet Dick Whitington (playing for the Services) wrote, “I have seen today the ghost of a once great cricketer”.

Bradman declined a tour of New Zealand and spent the winter of 1946 wondering whether he had played his last match. “With the English team due to arrive for the 1946–47 Ashes series, the media and the public were anxious to know if Bradman would lead Australia.” His doctor recommended against a return to the game. Encouraged by his wife, Bradman agreed to play in lead-up fixtures to the Test series. After hitting two centuries, Bradman made himself available for the First Test at The Gabba.

Controversy emerged on the first day of the First Test at Brisbane. After compiling an uneasy 28 runs, Bradman hit a ball to the gully fieldsman, Jack Ikin. “An appeal for a catch was denied in the umpire’s contentious ruling that it was a bump ball”.

At the end of the over, England captain Wally Hammond spoke with Bradman and criticised him for not “walking”; “from then on the series was a cricketing war just when most people desired peace”, Whitington wrote. Bradman regained his finest pre-war form in making 187, followed by 234 during the Second Test at Sydney (Sid Barnes also scored 234 during the innings, many in a still standing 405 run 5th Wicket partnership with Bradman. Barnes later recalled that he purposely got out on 234 because “it wouldn’t be right for someone to make more runs than Bradman”).

Australia won both matches by an innings. Jack Fingleton speculated that had the decision at Brisbane gone against him, Bradman would have retired, such were his fitness problems. In the remainder of the series, Bradman made three half-centuries in six innings, but was unable to make another century; nevertheless, his team won handsomely, 3–0. He was the leading batsman on either side, with an average of 97.14. Nearly 850,000 spectators watched the Tests, which helped lift public spirits after the war.