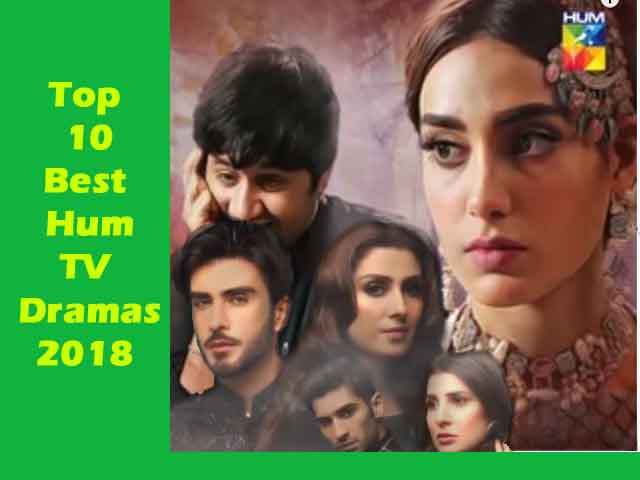 Entertainment is probably the first thing to search for when one is having free time or maybe not-in-a-good-mood time. Best Pakistani dramas will always distract you from the outside world and keep you in the setting of the story with it. But watching poorly plotted dramas is a very bad idea as it will only aid you in exasperation. Following is a list of top 10 Hum TV dramas 2018 that is a must-watch, a vibrant story in every serial you watch:

Khaani is the feminine form of Khan which means a ruler. This drama serial is directed by Anjum Khan and written by Asma Nabeel. It stars Feroze Khan and Sana Javed as main characters. The story is all about a one-sided love achievement. The hero which is Feroze khan (named as Hadi in the show) falls in love with the heroine which is Sana Javed (named as Khaani in the show) who is the sister of the same guy killed by the hero. Hadi starts expressing his love for Khaani whereas Khaani stands in the court for justice against him. The show is concluded with a very deep lesson. Hadi is sent behind the bars and he becomes a very religious person, practicing love and spirituality among the other prisoners. Khaani is married to another guy where she lives happily. The story gives a very strong reflection of Justice.

Deedan is on the second number in the list of best Hum TV dramas 2018. A very traditional themed drama. It stars Sanam Saeed (as Resham) and Mohib Mirza (as Zardab) in the serial. The story is about two young girls striving and struggling to escape the ignorant customs of a village where girls are treated as commodities. Resham, a girl who belongs to Swat is trapped in the old traditions. She is in love with a guy named Zardab but she is forced to marry another guy who can pay the desired amount of money to Resham’s father. Meanwhile, the other girl named Palvasha marries the love of her life and gets settled, enjoying very good living.

On the other hand, Resham’s husband dies in a factory accident but her in-laws don’t let her go because they consider her as their property. In the end, Resham leaves the village overnight with Zardab and gets away to another city. A lot of problems arose again in their lives but somehow they manage to survive and leads a happy life. The story has beautiful and colorful visuals shown in dresses and jewels.

Ranjha Ranjha Kardi is a drama serial with a magnificent story. It stars Iqra Aziz (as Noori), Imran Ashraf (as Bhola) and Syed Jibran (as Sahir) as main characters. The story revolves around Noori who belongs to a very poor family but her dreams are somewhat very opposite to her family’s status so she refuses to stay in that environment and moves to another city to start an ideal and respectful life. There she starts living by working in a factory and comes around two guys, Sahir and Bhola.

Sahir is a greedy man who only thinks about having a better future and Bhola, who is mentally ill and have a childlike behavior, owns a mansion and agricultural land. Sahir being completely deceit but Noori is always dreaming to marry Sahir and lead a life together. But Noori is forced to marry an aged smuggler and Sahir also refuses to marry her. Noori is all heartbroken and gets suicidal thoughts. Then she is advised by someone that the only way to save herself from all this is to marry Bhola. Initially, she is very much disgusted by his childish behavior but later on slowly and gradually she falls in love with him because of his innocence and true love for her. There starts a romantic relationship between Bhola and Noori and leads a happy life ahead.

This drama serial is a combination of romance and comedy genres. It starts Farhan Saeed (as Arsal) and Iqra Aziz (as Jiya) as the main characters. Jiya and Arsal have taken their vows (Nikkah) but aren’t married yet because the rukhsati is not done. They are cousins and are against this marriage which was done on the wishes of their late grandfather without their consent. In the entire serial, both Arsal and Jiya are planning to end their marriage somehow.

Meanwhile, two of their cousins, Kinza and Sherry also comes to their place before the marriage to attend their wedding ceremony. Kinza has strong feelings for Arsal and with time Sherry develops feelings for Jiya, due to which both Kinza and Sherry also start helping them to end their wedding. But there hits the twist when Jiya and Arsal feel strong affection towards each other and with the passage of time they confess that they both have fallen for each other. After facing a lot of ups and downs, finally, Arsal and Jiya gets married and the love story begins.

Ishq tamasha is a drama serial of romance genre with a very heart touching and appealing story. It stars Junaid Khan (as Mehrab), Kinza Hashmi (as Rushna), Aiman Khan (as Mirha) and Faizan Khwaja (as Arham). So the story is about two girls Rushna and Mirha who are cousins living in the same house. Mirha is orphaned and lives on her Chachi’s home. Wahaj, who is Rushna’s brother wants to marry Mirha but Chachi never wants this and hates Mirha. On the other hand, Arham sees Rushna in a bakery and falls for her and tries to impress her. Rushna after some time also falls for him but she misunderstands him as Mehrab.

When Arham proposes her she rejects because of his looks due to which Arham goes away and dies in a car accident. Mehrab vows to take revenge and marries Rushna to get revenge. She stays there with him and after sometime Rushna suffers from severe headaches and because of high dose medications, she reaches hospital and eventually dies. Meanwhile, Mirha is mistreated at Chachi’s home and Wahaj also doesn’t defend her due to which Mirha refuses his proposal. She starts living in a hostel and when Rushna death news is heard, everyone is in a sheer shock and each person realizes there mistake. The story ends when Mehrab proposes Mirha for marriage and she accepts.

This drama serial genre shows love story and family relations. It stars Momal Sheikh (as Abeeha), Hiba Bukhari (as Hira), Junaid Khan (as Jawad) and Muneeb Butt (as Shahzaib). The story is about two sisters, Hira and Abeeha who are abandoned by their father, as he was a gambler. So their mother moves to live with her sister along with her daughters. There Abeeha falls in love with her neighbor and childhood friend Shahzaib but he has affection towards Rohi. The other story is about Hira, who has very strong feelings for her cousin Jawad but he has already decided to marry Ujala, who is his friend from abroad where they studied together. Facing a lot of issues and critical situations among the family, in the end, Abeeha is married to Shahzaib and Hira is married to Jawad. The story ends in a very pleasant way.

This story has a huge negative influence on it due to its main character being negative. It stars Ushna Shah (as Nigaar), Bilal Abbas Khan (as Taimoor), and Azekah Daniel (as Saba) as main lead roles. The story revolves around Nigaar who is a disabled, self-centered, cruel and spoiled young lady. The reason behind her negativity is her father who is almost the same and supports her in every good or bad thing. Nigaar has strong feelings for her cousin Taimoor but Taimoor loves Saba.

Nigaar targets Saba and tried to defame her in front of Taimoor and somehow gets successful. On the other hand, she ruins her brother’s married life by making her brother divorce his wife showing him illusion-based situations because she hates her brother’s wife. Nigaar starts to lure Taimoor out of his sorrow and gradually marries him. After the marriage, she almost destroys his entire family but in the end, she is defeated and Taimoor marries Saba leaving her on her own.

The story theme is based on love and betrayal. It stars Sarah Khan (as Azra), Agha Ali (as Shahmeer) and Zhalay Sarhadi (as Mona) main lead roles. The story is about a married couple, Azra and Shahmeer who are in love with each other and living a happy life together. Azra loves her husband crazily. The twist emerges when Shahmeer betrays Azra and marries her childhood friend Mona, who is pregnant with his baby. Azra is devastated by hearing the news and couldn’t cope with it. After sometime Azra comes to know that she is pregnant too and finally stands up for her rights and decides to fight for her baby. She is motivated and supported by her friend Muskan. Somehow Shahmeer also seems more inclined towards Azra now as compared to Mona.

The story is about love. It starts Ayeza Khan (as Rabail), Areeba Habib (as Nishaal), Muneeb Butt (as Umair) and Imran Abbas (as Zain) as main lead roles. The story starts showing Rabail, who lives in her uncle’s house because her parents had died when she was 5 years old. Her uncle has two children, Umair and Nishaal. Rabail always takes care of Umair as she is a few years elder than him but she is unaware of the strong feelings Umair has for her. When his mother comes to know, she wants to get Rabail married to someone else. On the other hand, Zain has seen Nishaal and has fallen for her instantly as he is always after beauty.

He sends a proposal but misunderstands Rabail as Nishaal and asks for her to get married to him. Everyone agrees to it but when Zain and Nishaal come to know about the misunderstanding, the nikkah has been done. On the other hand, when Umair comes to know about the Nikkah he gets a mental breakdown. After that Nishaal and Zain continue their relationship and soon get married. Rabail left all alone and betrayed, is pregnant and after a year she gives birth to a baby girl. Zain realizes his mistake and knows that Nishaal is not his type and he doesn’t love her but was only attracted because of her beauty. He comes to Rabail for forgiveness but the innocent Rabail is now a cold-hearted person and refuses to forgive him. She goes back to her Uncle’s house and finally accepts Umair and they live happily ever after.

The last but not the least in the list of best hum tv dramas 2018 “Thays”. It stars Junaid Khan (as Asher), Hira Mani (as Rubab) and Farah Shah (as Zehra). The story revolves around Rubab, Asher, and Zehra. Zehra is Rubab’s mother and is very possessive about her daughter because her husband betrayed her and now she doesn’t trust any men out there. Rubab loves Asher but Asher loves her colleague. Zehra sends fake love letters to Rubab from Asher’s side so she can develop stronger feelings and later on get hurt. Gradually, time passes and Asher marries his colleague.

Rubab tried to commit suicide but survives. Asher considers her feelings now but Rubab is married to another man. He is only with her for her money. He takes the money and leaves Rubab who is pregnant. She leaves the house. Asher’s wife also asks for a divorce from him. In the end, Asher and Rubab are married and they live together.