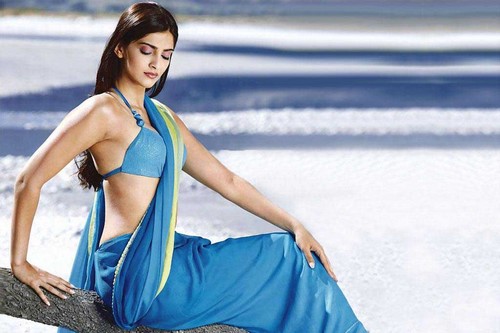 Bollywood is known for its glamorous quotient and actresses. There are many sensational and glamorous actresses, who take steps to make the industry more glamorous. These beautiful ladies are not shying away from bikini blouse. Here’s a look at the top ten divas, who made bikini blouse a latest style statement in Bollywood.

A model, she came 3rd in Femina Miss India in 2007 and went to compete in the Miss India International contest. Gupta appeared in Kingfisher Swimsuit Calendar in 2010. She entered the industry with a highly successful movie Jannat 2, grabbed attention in her bikini blouse. The actress managed looked hot and sexy in “Tera Dedar Houa” with Imran Hashmi, from Janat 2.

Known for her bold on-screen image and candid confession of her private life, she is frequently named in the media as a “s.x symbol”. Bipasha Basu was seen showing off her hot body in the music launch of Jodi Breakers. The actress was seen in a bikini blouse during the event.

Chitrangada Singh, best known for starring in Hazaaron Khwaishen Aisi and for her first mainstream commercial film, Desi Boyz. She always enthralled people with her intense acting in films like Hazaaron Khwaishein Aisi, Yeh Saali Zindagi and Inkaar too has a sensual side. The actress looked hot in bikini blouse and it just added to the charismatic personality.

Described in the media as one of the most popular celebrities in India, Rani Mukerji carried saree with lot of elegance in Kabhi Alvida Naa Kehna. The actress looked beautiful and perfect in bikini blouse in Tumhi Dekho Na song.

She is known as a fashionista; she has been getting various accolades for her unique sense of style rather than her films. The daughter of Indian film actor Anil Kapoor, Sonam Kapoor, who truly enjoys the title of style diva in Bollywood, was seen in a ravishing style in I Hate Luv Stories.

The former Miss World, Aishwarya Rai Bachchan, who charmed one and all in Robot with her elegant beauty, looked charming in bikini blouse and heavy saree.

A British Indian actress and former model who appears in Indian films, Katrina Kaif best Known for her glamour roles. One of the most popular celebrities, Katrina Kaif with Akshay Kumar sizzled in a hot rain song in De Dana Dan. The actress was seen in a hot avatar for the song and carried bikini blouse with charisma.

Kareena Kapoor carried bikini blouse confidently, thanks to her hot body. The actress grabbed eyeballs with her ultra sexy look and did full justice to the sarees in the song Teri Meri.

Famous for that gorgeous smile and toned body, Deepika Padukone looked glamorous in bikini blouse and looked hot with her desi look. she’s looking as chic and fashionable as ever in a Very Low Waist Saree from Yeh Jawaani Hai Deewani’s Badtameez Dil Song.

The Indian film actress, singer, and songwriter. The winner of the Miss India World and Miss World pageants of 2000, through her successful film career Chopra has become one of Bollywood’s highest-paid actresses and one of the most popular celebrities in India. She is chic, stylish and elegant women; a style icon personified. She multiplied her fan following has she turned ultra hot in a desi style for the sizzling song in Dostana and the bikini blouse added to her charisma.