Time and again, the Indian Television actresses have gained much fame and reputation by virtue of their charms and beauty. They possess the prowess to sport the traditional bride getup on screen and flaunt their bold avatar in personal life.

The beauty possessed by these actresses has enabled them to steal many hearts over the time.

The following are the top 10 most beautiful and hottest India TV serial actresses 2020 who have impressed the audience with their beauty and great acting skills:

Her name is quite often associated with the double roles she played in the Zee TV serial ‘Banoo Main Teri Dulhann’. This made her bag the Indian Television Academy Award for Best actress in the category of drama. Currently she can be seen in the role of Dr. Ishita Bhalla in the serial ‘Yeh Hai Mohabbatein’ that features on Star Plus. In 2004, she had been a part of India’s Best Cinestars ki Khoj and was announced the winner from Bhopal. She has also won the title of Miss Beautiful Skin in 2003 through her participation in Pantene Zee Teen Queen. She had been an anchor on Akash Vani in the Bhopal region. She had her debut appearance in Doordarshan telefilms. She married her ‘Yeh Hai Mohabbatein’ co star Vivek Dahiya in July 2016. She has a large number of awards and nominations to her name for her captivating and impressive roles in several serials. Divyanka maintains her charms by sticking to natural methods and ayurvedic products.

This beautiful lady holds the record of receiving the highest number of awards for her roles in different serials, most of which are for her debut role. She was also enlisted in the Top 50 sexiest Asian women by Eastern Eye in 2013. She is well known among the audience for her enchanting role as Akshara in the hit serial ‘Yeh Rishta Kya Kehlata Hai’. She is the highest earning TV serial actress in the present date. Hina was born in Srinagar and has an MBA degree from CCA School of Management, Gurgaon to her name. She is also expected to be seen in the latest season of Khatron Ke Khiladi, which is an action and stunt based reality show. Hina prefers natural methods to keep her charms stunning as always.

This gorgeous Indian Television actress is all set for her Bollywood entry with Akshay Kumar in near future. She is well appreciated for her roles as Krishna tulsi in ‘Kyunki Saas Bhi Kabhi Bahu Thi’, and Sati in ‘Devon Ke Dev.Mahadev’ and Shivanya in ‘Naagin’. She rose to the finals of the dance reality show Jhalak Dikhla Jaa in 2014. She has also won the first season of Zara Nachke Dikha with Karishma Tanna and Jeniffer Winget. She has had a number of appearances in several serials including ‘Pati Patni Aur Woh’, ‘Do Saheliyaan’, ‘Junoon- Aisi Nafrat Toh Kaisa Ishq’. She is an excellent Kathak Dancer as well. Mouni ended up at the 8th position among the top 10 most sexiest TV actresses in the year 2020. Being a dancer, she ensures that she maintains the perfect body every time. She believes that dancing for at least 30 minutes can help one to be fit in the long run.

She is one of the hottest actresses in the Indian TV serial world and has a proud 2.2 million followers on her Instagram account. Her role as Jeevika in the serial ‘Ek Hazaaron Mein Meri Behna Hai’ captured the attention of all serial buffs. She was ranked first among the Top 50 sexiest Asian women by Eastern Eye. She stepped into TV acting through the serial ‘Kahe Naa Kahe’ under the banner of Balaji Telefilms. She subsequently appeared in ‘Kya Dil Mein Hai’ under the same banner. She went on stealing hearts through her captivating roles in multiple serials like ‘Kis Desh Mein Hai Mera Dil’, ‘Kasturi’, ‘Baat Hamari Pakki Hai’, ‘Aahat’, ‘Ekk Nayi Pehchan’, ‘Brahmarakshas’. She has also bagged a large number of Academy awards, Parivaar Awards and many more for her various roles. Krystle sticks to a strict diet for maintaining her beauty and staying fit.

She started her career right at the age of 12 as a child actor in the movie ‘Raja Ko Rani Se Pyar Ho Gaya’. She also made an appearance in the movie ‘Kuch Na Kaho’ at the age of 14. Her role in ‘Saraswatichandra’ was widely appreciated and this led her to win the Indian Television Academy Awards for Best Actress Critics. She bagged the 21st position in the list of World’s sexiest Asian women. Jennifer is currently working in the serial called ‘Beyhad” featured in the Sony Entertainment Television. Jennifer has acted in a number of Hindi movies and also made appearances in a number of serials and has also won many awards for her roles. She had married her co-star Karan Singh Grover in 2012 but later on things turned out to be bad and they separated in 2014. Her charms and beauty have led her to become the most adored actress of the Indian Television. 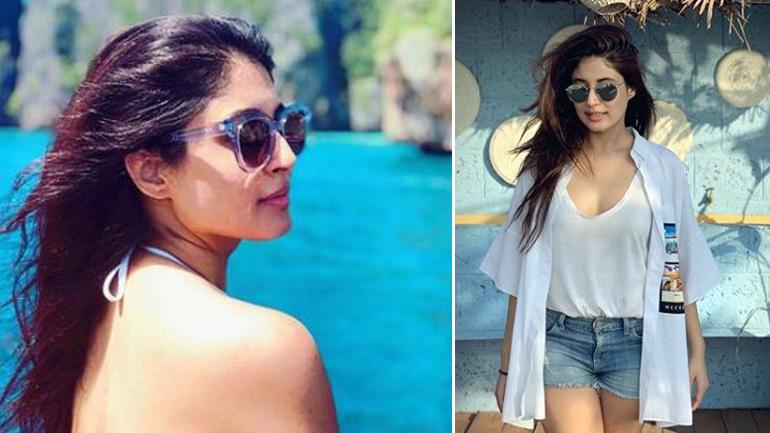 Kritika is very well known for her bubbly image that is depicted through her acting. She was born on 25 October 1988 and has gained fame for her role as Arohi in ‘Kitni Mohabbat Hai’ and Dr. Nidhi in ‘Kuch Toh Log Kahenge’. She has also acted in a number of friction shows like Reporters and has appeared in many reality shows like Zara Nachke Dikha, Jhalal Dikhla Jaa. She has also hosted shows like Webbed 2 on MTV. She can be currently seen playing a character role in ‘Prem Ya Paheli-Chandrakanta’. She was pursuing studies for her graduation from National Institute of Fashion Technology when she got a call for her role in ‘Kitni Mohabbat hai’. She grabbed eyeballs when she went on topless for the photo shoot of a magazine. She bagged the 5th position among the 10 most sexiest TV actresses in 2020.

One can currently see her in Comedy Nights Bachao and she is well known for her role as Vrinda in the hit serial ‘Tujh Sang Preet Lagai Sajna’. She has also remained a contestant in the dance reality show ‘Jhalak Dikhlaa Jaa’. She has also made appearances in several movies like Great Grand Masti and is hoping to work in Bollywood in near future. She was spotted on the 8th season of MTV series Roadies and has also acted in India’s Swim Team on Channel V. She has also acted in several other serials including Crime Patrol and The Adventures of Hatim.

The winner of the dance reality show ‘Jhalak Dikhlaa Jaa’ season 6 in the year 2013, Drashti has been known for her roles in serials like Madhubala- Ek Ishq Ek Junoon and Ek Tha Raja Ek Thi Rani. She has a graduation degree in Sociology from Mithibai College, Mumbai. She had worked in a number of modeling assignments and some music videos before stepping into the acting industry. Dhami was the brand ambassador for Canvironment week 2011 and 2013 in an aim to save the planet. She was also associated with the Swacch Bharat Abhiyaan. For her beauty, Dhami was nominated for the title of Sexiest woman by FHM. She has won a series of awards for her captivating performances.

She is one of the eminent actors in Telugu Movies and is well known for her role as Goddess Parvati in the mythological serial Devon ke Dev. Mahadev. Sonarika first worked in a serial titled ‘Tum dena Saath Mera’ in the year 2011. She made her first appearance in a Telugu Movie in the year 2015 in a movie by the name Jadoogadu. Several roles played by her are widely appreciated by the audience as well as the critics. She stunned the TV Industry with her Bikini Pictures which went viral in no time. She ranked 2nd among the sexiest Indian TV actresses.

She has successfully created a huge fan following by virtue of her cuteness, beauty and her acting skills. She is well known for her role in the serial ‘Ek Hazaaron Mein Meri Behna Hai’. Leaving behind many major Bollywood actresses, she was ranked number 3 among the top 50 sexiest Asian women by Eastern Eye newspaper. She made her debut appearance into the television industry through the serial ‘Kaali- Ek Agnipariksha’. She has also acted in many more serials including ‘Behenein’, ‘Jamai Raja’.

Her acting skills and the depth she is into acting is very well evident from her shaving her head for a role as a cancer patient. She has also made many guest appearances on various hit TV serials. She was last seen in web series Twisted where hse made news for the bold role and kissing a girl. She would be a part of the latest season of Khatron ke Khiladi as well.

These actresses have combined their beauty and their talents to be the perfect entertainment packs for the audience. They have widely gained the appreciation of the audience and the critics by giving their best on screen. These actresses prove that whenever it comes to beauty, Indian Actresses would always be on the crest.