The 2021 West Sulawesi earthquake struck the Majene Regency, in the province of West Sulawesi, on the Indonesian island of Sulawesi on 15 January at 02:28 WITA with a moment magnitude of Mw 6.2. This earthquake was felt as far away as Makassar, the capital of South Sulawesi, and Palu in Central Sulawesi. Several buildings were also reportedly destroyed in neighboring cities, including a three-storey building in Mamuju. At least 42 people are confirmed dead and 820 more are injured. It was preceded by a foreshock measuring 5.7 a few hours earlier. 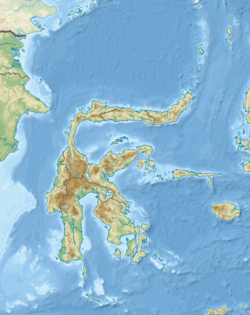 The earthquake struck at a shallow depth of 18 km with its epicenter located in Majene Regency, West Sulawesi. According to the USGS, a Mercalli Intensity of VIII (Very Strong) was recorded. The Indonesian BMKG stated that an intensity of VI (strong) was felt in Majene for 5-7 seconds. The shaking was felt in neighboring cities, as far away as Makassar to the south and Palu to the north. The earthquake happened along the Mamuju–Majene thrust fault, which runs close to the city of Mamuju, West Sulawesi. This fault was also responsible for a massive earthquake in 1969 near Majene, which killed 64 people. That earthquake also caused a massive tsunami and landslides, damaging at least 1,200 houses. A major earthquake in the region is expected to occur every 75 years. BMKG stated that the fault was overdue for another large earthquake as the last damaging earthquake happened in 1969.

A magnitude 4.9 aftershock struck at 23:32 UTC (early Saturday morning local time) and a depth of only 10km.

Severe damage was reported across Majene Regency and in several area in Mamuju Regency. West Sulawesi’s Gubernatorial Building, which was located in West Sulawesi’s capital Mamuju, was destroyed in the quake. Two people were reportedly trapped beneath the ruins. Parts of Hotel Maleo in Mamuju also reportedly collapsed. Meanwhile, a section of Mirta Manakarra Hospital, a main hospital in Majene also collapsed, trapping at least 6 people inside  Mamuju’s main hospital also reportedly suffered extensively, with 50% of its structure were reportedly damaged by the quake. Hundreds of patients had to be treated outside of the hospital due to fear of collapse.

Telecommunications reportedly went down and blackouts were reported as multiple power stations were damaged in the quake. AirNav Indonesia reported that its office in Mamuju Tampa Padang Airport was severely damaged in the quake. The ATC tower in the airport was also damaged. Navigational operation was diverted to Makassar ATC, while airport navigation in Mamuju was conducted in minimal effort due to the extensive damage.

Mamuju Penitentiary facility suffered damage as well, injuring at least 3 people. The perimeter fence of the penitentiary was reportedly destroyed. At least one Community Health Centre (Puskesmas) was destroyed in the quake. A military district office in Malunda was also severely damaged. At least 2 main hospitals in West Sulawesi were destroyed in the earthquake, while three hospitals remain operational.

Immediate assessment made by the Regional Disaster Mitigation Agency revealed that at least 62 houses had been destroyed in the earthquake.

In the immediate aftermath, at least 4 people were killed and 600 people were injured in the quake. More than 2,000 people evacuated to evacuation centers. The death toll later rose to 27 and about 637 people were injured and 15,000 people were displaced. Death toll later rose again to 35 as more bodies were recovered by search and rescue personnel. At least 26 were from Mamuju, while 9 others were from Majene. On the night of 15 January, BNPB stated that 42 people had been killed in the earthquake. Most of the victims were residents from the provincial capital, Mamuju Most were found inside their home, as the earthquake struck at night, when most people were asleep. Dozens were still trapped inside collapsed structures. At least 2 people were killed after a section of Mamuju’s Mitra Manakarra Hospital collapsed.

Indonesian National Board for Disaster Management stated that at least 189 people in Mamuju Regency were severely injured. In Majene Regency, at least 637 people were slightly injured. Several of the injured have been evacuated to field hospitals.

At least 10 evacuation centers had been prepared for the survivors of the quake. Survivors were also asked to go to Majene’s Stadium and Mamuju’s Gubernatorial Office